With Ohio State’s football team in town last weekend, the night manager of the Days Inn Penn State was probably... 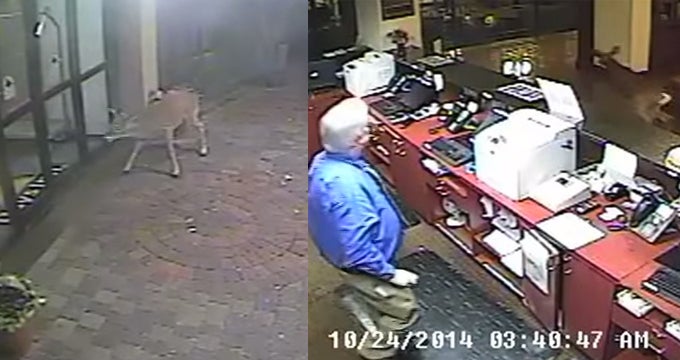 With Ohio State’s football team in town last weekend, the night manager of the Days Inn Penn State was probably expecting some rowdy behavior to go down on his watch, but he couldn’t have been prepared to see a whitetail buck as it crashed through the lobby, skidded on the slick tile, and scrambled down the hall toward the hotel restaurant. Security camera footage posted to YouTube by the Centre Daily Times shows the little buck entering the hotel at around 3:45 a.m. through the motion-activated front doors and tearing past the bewildered employee behind the counter.

The panicked animal made its way down some stairs and leaped across a planter before getting itself stuck in the hallway outside the restaurant bathroom. Pennsylvania Game Commission officers were called to the scene. Unfortunately, in its panicked state, the deer was a danger to itself, and they were forced to dispatch it after failed attempts to administer a tranquilizer. No damage to the property was reported.