Video: Skydiver in Flying Lawn Chair Shoots Himself Down with a Shotgun

I bet you didn’t think that anyone other than a cartoon character could actually fly in a folding chair attached... 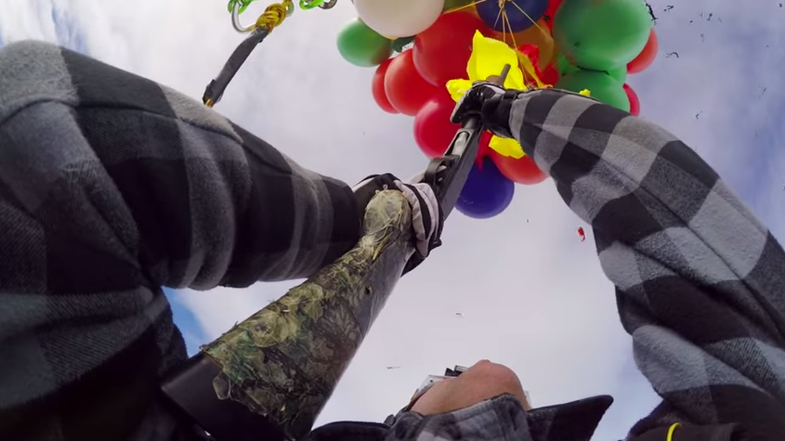 I bet you didn’t think that anyone other than a cartoon character could actually fly in a folding chair attached to a bunch of balloons. Well, someone did. In a recent YouTube video, GoPro athlete (yes, that’s a real thing too) Erik Roner took a new approach to skydiving by strapping himself to a reclining chair attached to 90 weather balloons, ascending to 8,000 feet, and shooting the balloons with what appears to be a Remington 870 shotgun.

The video shows the behind-the-scenes planning and execution of the stunt—as well as a few dicey moments. When Roner’s contraption initially reaches thousands of feet in the air, you can hear a few balloons spontaneously burst, startling the skydiver. “Woohoo, that’s a popped balloon,” he says. “There goes another one. They told me that would be scary, and yes it is.”

When the moment of truth arrives, Roner shoulders the gun and fires three shots, popping several balloons, but continues to float higher. After reloading, he continues firing until he’s no longer tethered to the balloons and free falls towards earth, still planted in the seat of the recliner—all with GoPro cameras rolling.

Safely on the ground, Roner recovers his chair and cameras before signing off, saying, “Let’s go find my gun.”