An angler from Sweden has shattered the unofficial record for heaviest fish caught from a kayak, after reeling in an... 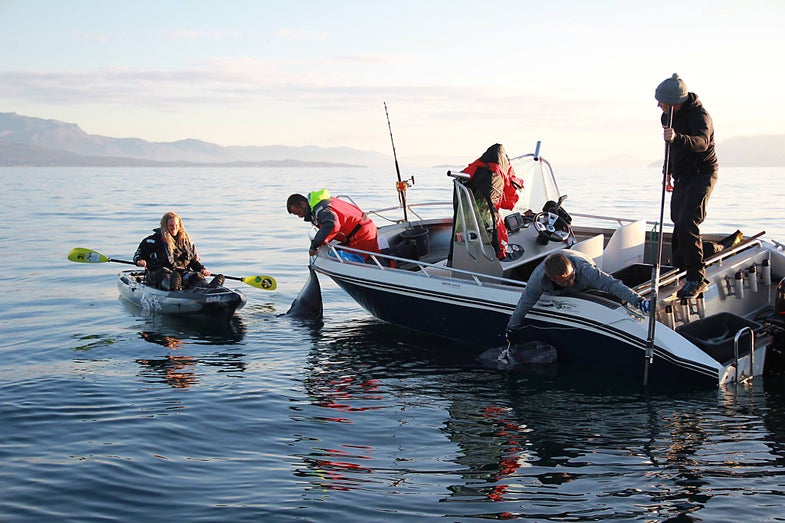 An angler from Sweden has shattered the unofficial record for heaviest fish caught from a kayak, after reeling in an estimated 1,247-pound Greenland shark on September 1.

A story from GrindTV says angler and Jackson Kayak pro-staffer Joel Abrahamsson paddled his kayak about a mile off Norway’s Andørja Island, plying water 1,600 feet deep, with a goal of breaking the unofficial record set in 2008 by a kayaker who caught and released a 400-pound salmon shark in Alaska. Marine scientists and a camera crew accompanied Abrahamsson in another boat to document his record-setting effort as part of an ongoing study of the sharks. It took a few hours to finally coax a bite, and after he hooked the shark, it took about 90 minutes to bring it to the surface.

“The fish is not a spectacular fighter, but it constantly tugs its head down and keeps slowly pulling, making it impossible to ever stop winding,” said Abrahamsson. “So I put the reel in low gear and just grind the fish upwards. The fight was just [grueling] and extremely heavy. A few times it got a bit gnarly. I was scared of going over.”

Abrahamsson agreed beforehand that he would not handle the shark or attach it to his kayak, so he passed it off to the researchers, who measured the fish at just over 13 feet long, and determined it is likely over 200 years old. Greenland sharks are thought to be the longest-living vertebrate on the planet.

Scientists estimated the shark’s weight using a formula, not a scale. A 225-pound blue marlin from Hawaii remains the heaviest kayak-caught fish weighed on a certified scale.

While Greenland sharks are protected from commercial harvest, recreational anglers are allowed to pursue them with rod and reel. “There are only about 10 to 15 Greenland sharks caught every year in all of Scandinavia, so it is a rare species,” said Abrahamsson, who added that shark swam away apparently healthy upon its release.