Wisconsin 10-year-old Kyler Verbeten’s first shot at his first deer hunt was a miss—but his second was a double whammy.... 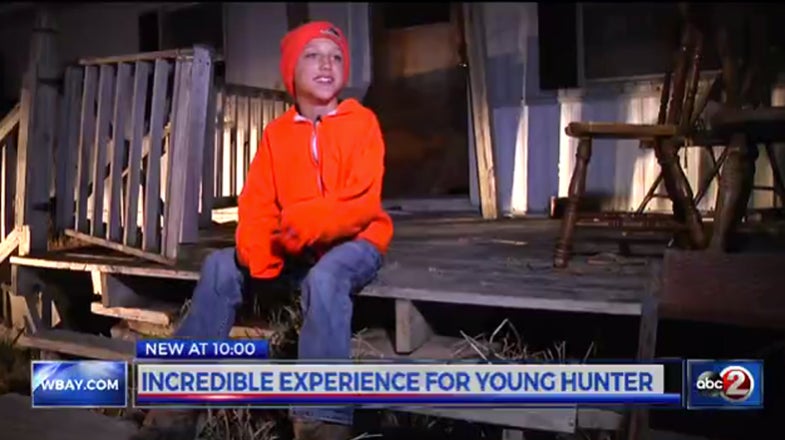 Wisconsin 10-year-old Kyler Verbeten’s first shot at his first deer hunt was a miss—but his second was a double whammy. WBAY reports that, in late November, the first-time hunter from Greenleaf was aiming for a doe, but ended up killing it and another nearby with one bullet.

It started when Kyler and his dad, Matt Verbeten, spotted two does in the woods. When Kyler missed his first shot at the larger of the two, his dad laughed it off and encouraged him to try again. When Kyler did, the bullet went through both deer. “I was so excited I almost jumped out of the stand,” Kyler told WBAY. “I just ran down the ladder and ran out there to look at them.”

Matt used his tag for one of Kyler’s does because Wisconsin has a group hunting law for gun season, which allows a person to shoot more than one deer as long as there are enough tags within the hunting party to cover it. “The bigger component of the two-deer issue is being aware of the target and what’s beyond it,” says Matt O’Brien, Wisconsin Department of Natural Resources administrative warden. “It’s basic firearm safety. Hopefully, you’re certain about what you’re shooting at and conscious of what’s in the background.”

According to Fox News, Kyler wants to get a buck next year, and he’ll continue to hunt with his dad. “When I’m sitting with my dad, he always makes sure I’m quiet,” Kyler says. “And makes sure I’m ready for the deer to walk out.”