Video: Volunteers Wrestle and Free Black Bear With Bucket Stuck on Its Head

A black bear—nicknamed “bucket bear” by locals after it was spotted wandering western Pennsylvania for weeks with an object stuck... 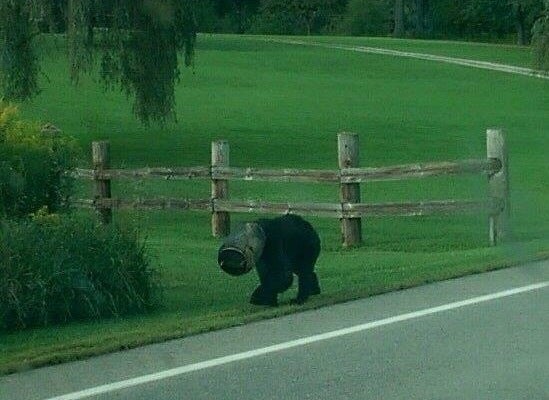 A black bear—nicknamed “bucket bear” by locals after it was spotted wandering western Pennsylvania for weeks with an object stuck on its head—was finally freed thanks to an ad hoc group of volunteers on Monday.

According to a story from The Patriot News, reports of the bear began surfacing as early as July 4, but repeated efforts by the Pennsylvania Game Commission to trap it were unsuccessful.

Hoping to bring awareness to the animal’s plight, animal rescue worker Krissy Elder of Seneca, Pa., created a Facebook page called Save the Bucket Bear, which attracted the attention of Dean Hornberger and Samantha Eigenbrod—both volunteers in animal rescue programs. Together, they organized a group to go looking for the bear early on the morning of Labor Day.

After searching the area for two hours, the bear appeared near a road, and the team chased it for 20 minutes before pinning it down. The “bucket” turned out to be a black air bag called a “maxi” that provides a cushion between a tractor and trailer. A small opening in the contraption had allowed the bear to get some food and water during the weeks that it was stuck, though Hornberger noted that it seemed underweight for that time of year.

It took 20 minutes to cut through a wire ring that was keeping the maxi on the bear’s head. Aside from some minor scratches on the rescuers, no one appears to have been harmed by the procedure. Once free, the animal ran into the nearby woods. Eigenbrod filmed the entire rescue effort with her cell phone.