Video: Woman Falls Through Ice Trying to Save Dogs

Footage from a body-mounted video camera shows just how lucky a 32-year-old woman and her two dogs are to be... 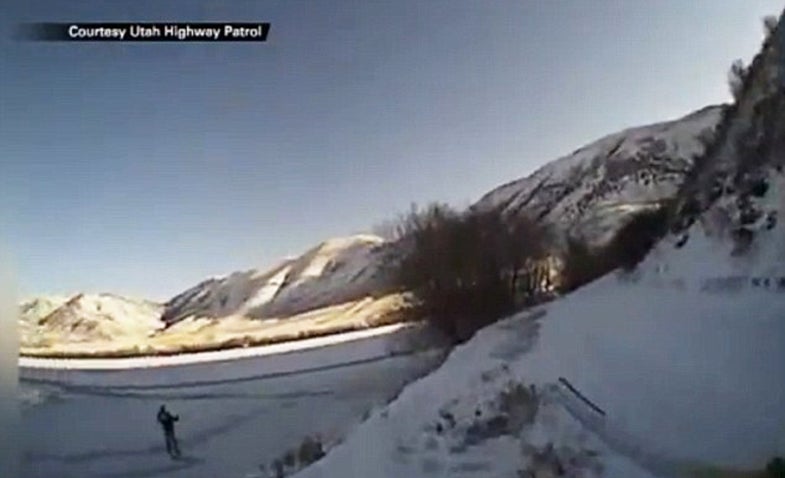 Footage from a body-mounted video camera shows just how lucky a 32-year-old woman and her two dogs are to be alive after the trio recently fell through thin ice on a Utah reservoir and waited nearly 10 minutes for help to pull them from the frigid water.

Fortunately, Thomas Braithwaite, a municipal worker driving past the reservoir, spotted the woman and radioed for help. Braithwaite later told Fox 13 that it was a fortuitous encounter—he usually begins his rounds around 6 a.m. but was running a few hours late that day.

Part-time police officer Brad Nelson responded to the call and said that he found the woman struggling, with ice up to her chest, so he tried using a rescue device that resembles a Frisbee attached to 200 feet of rope. The woman, however, was too far out to grab it on the first few throws. Putting his own life in danger, Nelson walked about 30 feet out onto the ice to close the distance, and the woman was then able to grab the rope. Her two pets were able to make it out of the water on their own and walked to shore. Once off the ice, Officer Nelson wrapped the woman in a blanket and hurried her into a warm car.

In the video, Nelson tells the woman, “You are friggin’ lucky. No way you should have survived that.”

The woman received treatment at Brigham City Community Hospital for hypothermia but was discharged the same day. She later called Officer Nelson to thank him. Nelson, a three-year veteran of the department, mentioned he had no formal training for such a rescue, but simply knew that he had to act quickly. “I knew the basics of it. I did what I had to do,” Nelson told KSL.com.