Earlier this month, two anglers on separate fishing trips underscored the notion that you should enjoy the moment while you … Continued 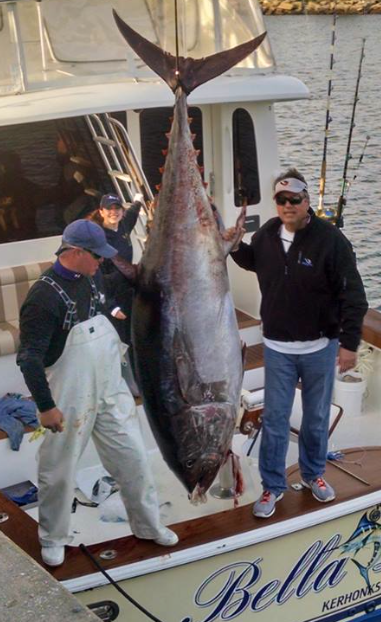 Earlier this month, two anglers on separate fishing trips underscored the notion that you should enjoy the moment while you can, after breaking Virginia’s bluefin tuna record not once, but twice in the same week.

A story from the Virginian Pilot reported that Robert Smith of Manteo, North Carolina was fishing about 80 miles southeast of Virginia Beach with tackle not necessarily suited to battle large tuna when a big fish hit. By the time Smith was able to get the 576.5-pound bluefin topside, it towed the boat 12 miles from where it was hooked.

“This fish took 5 ½ hours to get in. A totally different fight. I’ve got bigger fish, but this, for me personally, was my toughest fight,” Smith said. “It made four big runs and nearly spooled us twice. It was an epic battle.”

Smith’s bluefin beat the old state record by 3.5 pounds, but a week later, while fishing virtually the same area where Smith caught his fish, Chase Robinson of Virginia Beach hooked and landed an even bigger tuna—a 606-pound bluefin.

Robinson said the fight also lasted about 5 ½ hours, but dragged his boat more than 17 miles out to sea. When he finally was able to get the fish to the surface, it was supposedly so big and heavy it straightened three gaffs and broke the fish door on the boat’s transom when the crew tried to pull it through.

“I hit a wall about two hours in, but everybody kept me going. My hands are all blistered up,” Robinson said. “It is what it is and records are meant to be broken. . . If somebody is out there really fishing for a record, it will be broken again. Maybe several more times.”

Both fish measured 102 inches long, and both anglers filed paperwork with the Virginia Saltwater Fishing Tournament to have their catches noted as records. If approved, the books will list Robinson’s fish as the record, and that it beat out Smith’s fish.