Sam Ellinger of Ellensburg, Washington, spends far more time in the woods hunting elk and mule deer than on deep-sea... 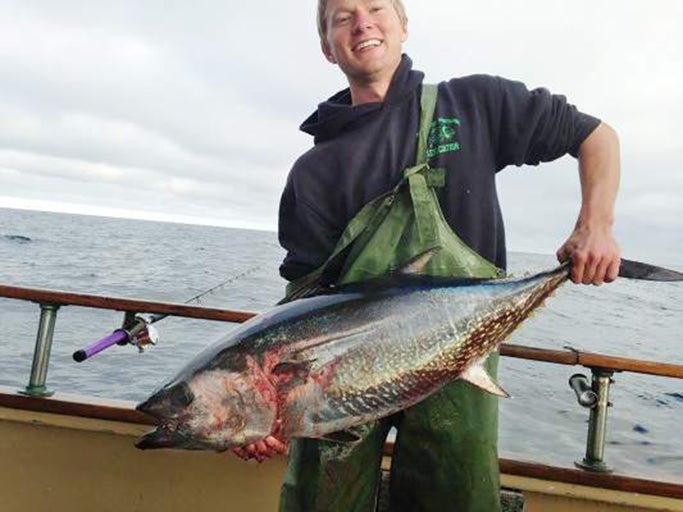 Sam Ellinger of Ellensburg, Washington, spends far more time in the woods hunting elk and mule deer than on deep-sea charter boats, but he’s getting attention for his rod and reel skills after catching a new state-record bluefin tuna. The 20-year-old caught the 39.2-pound fish in September, and the Washington Department of Fish and Wildlife are finally able to confirm that it tops the old record by 2.7 pounds, according to the Yakima Herald.

Ellinger, a Central Washington University student studying environmental biology, had been fishing for albacore on a 55-foot boat about 30 miles from Grays Harbor for two days already—the action was simply just too good to leave. “We fished literally all day, until our arms wanted to fall off,” Ellinger recalled. “It was literally fish after fish after fish of albacore tuna.”

Until that point, Ellinger had only been fishing three times, so he wasn’t quite prepared for the fatigue that comes from reeling in dozens of tuna, or the melee of fish and lines. “It was pretty much a dance of trying to keep your line away from everybody else’s, because nobody stops fishing,” he said. “It’s pretty chaotic.”

Around noon on their third day, Ellinger said he felt something large hit his live-anchovy bait, and it took more than an hour to bring the fish close enough to see what it was. In fact, everyone else on the boat reeled in their lines to watch the fight. When the captain saw it was a big bluefin, he could hardly contain his excitement.

“The captain starts freaking out, because he obviously knew it could be a state record,” Ellinger said. “I think the minute after we got it on the boat he was on the radio telling the other boats out there we’d caught this giant bluefin. I didn’t think much of it, but you could tell when we got back to the dock, with the way everybody was reacting, it was something special.” At 155 pounds, himself, Ellinger had reeled in a 41-inch fish weighing about a quarter of his body weight.