Watch: Beachgoer Cuts Pups from Dead Shark, Returns them to the Ocean

Here’s your weird shark story for the day… A woman was walking down a beach in South Africa and spotted... 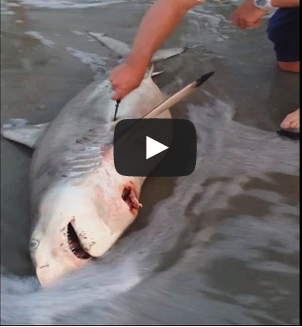 Here’s your weird shark story for the day…

A woman was walking down a beach in South Africa and spotted a dead shark washed up on shore. She could tell the shark was pregnant and noticed “movement in the stomach region,” according to a story on News24.com.

She recruited the help of another beachgoer, who cut the shark open and delivered three live pups. The man, who was never identified in the story, then tossed the sharks into the ocean for their very first swim. The woman recorded the hasty surgery on her phone and the video was posted to YouTube on Monday.

Shark pups hatch within their mothers and stay inside them for up to two years. Once they’re birthed—with a full set of teeth—they’re on their own. In fact, baby sharks leave the womb and swim away quickly, so they won’t be eaten by their parent, according to News24.