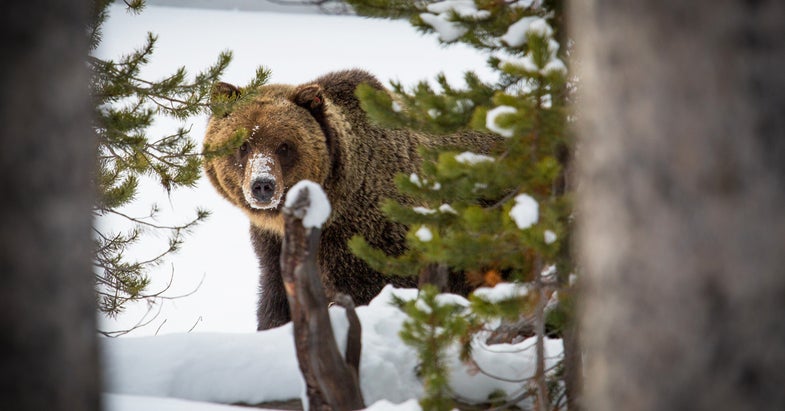 After 40 years of federal protection, grizzly bears may become fair game for hunters, as a handful of Western states push for the responsibility of managing the animals.

The Associated Press reports that a plan drafted by wildlife officials from the greater Yellowstone states of Wyoming, Idaho, and Montana estimates how many grizzly bears could be harvested while still maintaining viable populations if the species were no longer protected under the Endangered Species Act.

Though the proposal doesn’t specify the number of bears each state would permit to be harvested, it does specify a 19,300-square-mile management zone that includes the wilderness and national forests near the Yellowstone National Park. Further, the proposal allocates a 58-percent share of the permitted harvests to Wyoming—likely because it’s home to most of the region’s grizzlies—while Montana would get 34 percent and Idaho 8 percent.

Officials estimate that there are more than 700 grizzlies in the defined management zone, though biologists say that there are likely more living outside the borders, as the bears have expanded their range as their populations have grown.

In a December 4, 2015, joint letter to U.S. Fish and Wildlife Director Dan Ashe, the states’ wildlife directors urged the federal government to retract the bear’s threatened status. “It is critically important that we capitalize on our tremendous progress and momentum. . . by proceeding with a long overdue delisting,” the letter stated.

The last legal grizzly hunt in the Lower 48 was in the early 1970s, and a total of 58 bears were harvested in the five years leading to the species’ being listed as threatened, in 1975, as the AP notes. Since that time, the bear’s numbers have rebounded. Opponents to the proposal, however, argue that it’s too soon to consider hunting as a management tool because grizzly populations are still too low.

Quentin Kujala, chief of wildlife management for Montana Fish, Wildlife, and Parks, says that the harvest quotas will likely be modest and on a sliding scale to help maintain viable bear populations and to avoid any chance of the species reverting back to federal protection. Hunting will be allowed if there were more than 675 bears, and it will be barred if the number drops to fewer than 600, Kujala said. Likewise, Wyoming Game and Fish spokesman Renny MacKay told the AP: “We’re definitely not talking about a large number. We’re not talking hundreds or anywhere near that.”

The Christian Science Monitor points out that tourism is a $1-billion industry in the greater Yellowstone area, and that, according to research, the park could lose $10 million without the potential of spotting bear near the roadside.