Will Texas Grow the Next World-Record Bass?

Texas wants to be the home of the next world record bass — even if it means giving nature a... 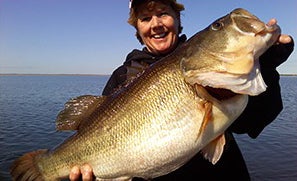 Texas wants to be the home of the next world record bass — even if it means giving nature a little push. That’s why it created Operation World Record under its ShareLunker program — an effort that encourages anglers to donate any bass weighing more than 13 pounds to the state for spawning purposes. According to a story from the San Antonio Express News, the program is gaining traction.

Oral surgeon Dr. Gary Schwarz said that while no angler has caught anything even close to a new state bass record in years, let alone a world record, he’d like to see Texas as the place anglers come looking for it. He’s so enthused he recently signed a 15-year contract with the Texas Parks and Wildlife Department (TPWD) allowing it to use his private lake as a nursery.

“I had taken this featureless, barren mudhole and turned it into bass mecca,” Schwarz said. “It was chock full of nutritious things to eat because of the diversity in water depths and edge effect I had created in the main lakes where the bass lived.”

While the doctor was surprised at the length of the contract, Allen Forshage of the TPWD’s Freshwater Fishing Center said it’s the standard term because big bass don’t grow overnight.

“All of our contract lakes where we’re monitoring the max size are for 15 years because that’s how long it takes for them to get at least that size,” Forshage said. “They can get there in as short as eight years, but the average lunker is 11 years old. We designed the length of the study to go beyond that.”

Schwarz is no stranger to raising bass. In fact, he’s footing the bill for most of the project and plans to lend some of his expertise in the future and said by creating the pond from scratch and having control over variables that affect fish health, they’re in a good position to accomplish their goal -— create bigger fish.

“He was willing to build the lake the way we wanted it built,” Forshage said. “He manages the lake. What we did is we stocked it with some of our operation world record fish. He signed the contract and is going to follow our recommendations for the next 15 years.”