Dennis Arndt of Waupaca County, Wisconsin, was hunting private land last weekend when he took down the black bear of... 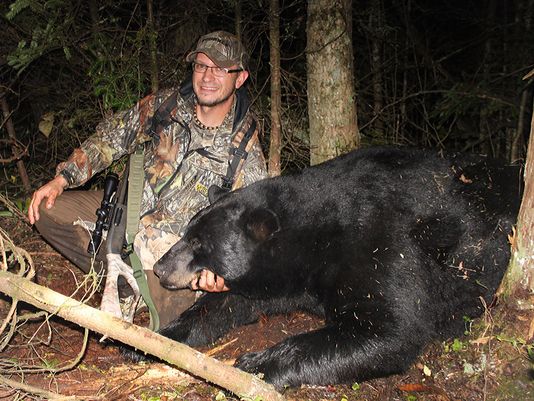 Dennis Arndt of Waupaca County, Wisconsin, was hunting private land last weekend when he took down the black bear of a lifetime—a 780-pound bruin, known locally as “Sampson,” that has eluded hunters for years.

Arndt captured several trail-camera photos and videos of the bear a week earlier, but said he was surprised when it appeared where he was hunting around dusk. He shot the animal and it ran into a nearby swamp. Knowing it was too big to drag out alone, Arndt excitedly fumbled for his phone to call friends.

“I’m like ‘who is this?’ ‘This is Jeremy.’ I’m like ‘I got him, I got him!’ I don’t even know which friend I dialed first. I told him ‘get the crew together, I got Sampson,'” Arndt told Fox affiliate WITI.

Arndt and friends were able to drag the bear out on a sleigh and lift it with a skid steer tractor, but they didn’t realize just how big it was until they weighted it on a certified truck scale. “Some of the bears in the Waupaca area that I’m familiar with have been in that 400-500 pound range, and I hear about one a year,” said DNR Conservation Warden Ben Tremel. “But this is just an incredible animal.”

Because bear trophies are typically ranked by skull measurements instead of weight, Arndt will have to wait a few months before he can officially score his bear. In the meantime, the rest of the animal is at a taxidermist, who is creating a life-sized mount for the hunter.