Imagine for a moment if you could enjoy your passion—deer hunting, say—while at the same time helping keep people safe.... 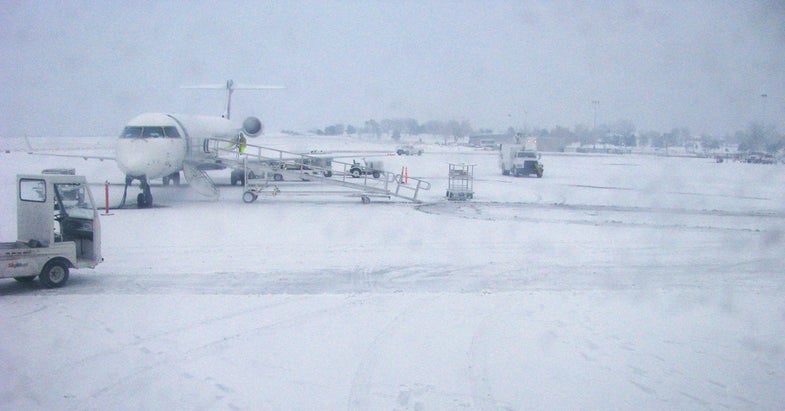 Imagine for a moment if you could enjoy your passion—deer hunting, say—while at the same time helping keep people safe. Well, that’s exactly what hunter Scott Kirchoff is doing at the Watertown Municipal Airport, in Wisconsin. Though hunting season is over, the airfield is overrun with whitetail deer. Kirchoff is tasked with reducing the population so that the animals aren’t a problem for incoming and outgoing air traffic.

According to the story, the search for a solution to the problem began several years ago when Jeff Baum, an aviator and the president of Wisconsin Aviation, plowed into a group of deer while he was landing. He said that ducks, geese, upland birds, and predators have always caused problems around the unfenced airfield, but that the size and the weight of deer present a larger threat to safety.

“It was a fairly sizable corporate airplane, and the deer caused over $50,000 worth of damage. We’ve had at least two other aircraft that I know of that have hit deer out here,” Baum told the Daily Times. “From our perspective, we believe human life is far more valuable than animal life. Whatever measures can be taken, should be taken.”

To be able to cull deer year-round, airport facilities manager Krys Brown applied for wildlife damage tags from the state’s Department of Natural Resources and received a recommendation that Kirchoff should be the lone volunteer hunter. Not only does Kirchoff have more than 40 years of hunting experience, but he’s also taught gun-safety courses for 15 years and was Wisconsin’s 2013 instructor of the year. “I’ve passed up many more shots than I’ve taken. I don’t shoot unless I have a safe backstop,” Kirchoff told reporters. “To date, most of the shots have been one-shot kills with the deer dropping in their tracks.”

For added safety, Kirchoff said that he uses low-velocity ammunition that rapidly expands when it hits an animal and rarely, if ever, passes through. Afterward, he shares culled deer with employees of the airport, as well as his family and friends. He also uses some of the meat in his Learning to Hunt for Food classes, in which students learn how to skin and butcher wild game. “I’ve definitely put a dent in the herd and they’re getting wiser,” Kirchoff said. “Hopefully, they are learning the runway isn’t a safe place for them.”