Woman Harasses Stingray Fisherman, What Would You Do?

Every once in a while, I come across a video that makes me ask myself, “what would I do in... 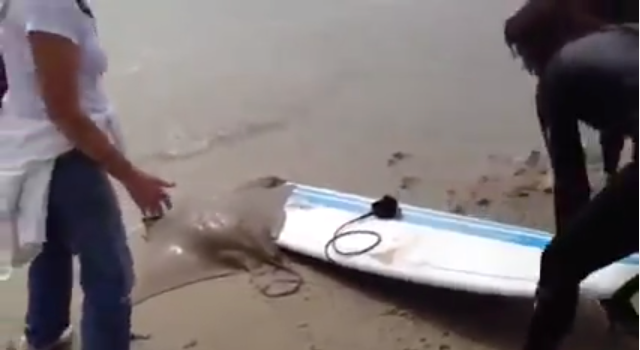 Every once in a while, I come across a video that makes me ask myself, “what would I do in this situation?” A clip of an obviously irate (and obnoxious) woman screaming and berating two stingray fishermen for keeping their catch is just one of those videos. Though this clip was captured and posted to YouTube years ago, it’s suddenly gaining new life on social media websites. So, we thought it was worth discussing here on the FN blog.

You might want to turn your speakers down. The woman has a loud, grisly voice that and at times she rambles incoherently. The man filming the incident can’t help but chuckle at her exaggerated behavior, but still tries to explain the fish was caught legally. That fact seems to further enrage the hysterical woman. When her screams seem to attract more wide-eyed stares than action, she crosses yet another line and begins slinging slurs.

“It’s illegal to fish! You’re from Germany,” she screams. “They will put every German from Germany in prison!”

But because the men who caught the stingray are Hispanic, it’s unlikely her threats struck a chord. In a last ditch effort, she attempts a slight-of-hand trick to free the ray; bending down to gently rub the stingray as if saying goodbye, then not-so-smoothly trying to unhitch the angler’s tether.

I have to give credit to the fishermen and the cameraman. This woman obviously has issues that go beyond the harvesting of a stingray, and I’m not sure I could’ve remained as composed in their shoes. You can watch the first moments of the incident here, or the find the entire clip on Youtube (caution: profane language).