Wyoming Bull Is Largest Ever Shot With a Crossbow, According to SCI

Albert Henderson, a hunter from Burlington, Wyo., proved that it isn’t impossible to find trophy-sized animals on public land, when... 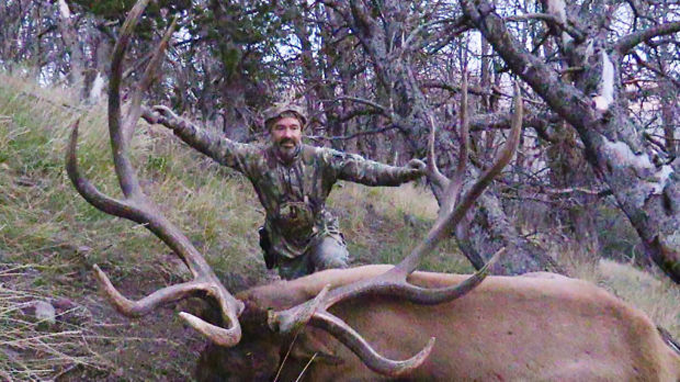 Albert Henderson, a hunter from Burlington, Wyo., proved that it isn’t impossible to find trophy-sized animals on public land, when he arrowed a 426 1/8 inch elk in Shoshone National Forest in September 2014. The animal is now being hailed as the biggest bull ever shot with a crossbow, according to the Safari Club International (SCI) scoring system.

“It’s pretty rare to see elk like that anywhere in the state, and probably more rare in general areas,” where, Henderson says, “you have a few less elk and a few more people. That’s why you go out and work so hard for that chance.” The Casper Star Tribune reports that Henderson ended up in the area by default—he was hoping to hunt a limited-quota area, but when he didn’t draw a tag, he made plans to hunt public land with friends. He borrowed the crossbow he used on the hunt.

The group spent five days wandering the woods before one friend tagged a bull. Hearing other bulls in the distance, Henderson and the rest of the group left the young hunter and quickly found a respectable 350-inch bull with cows near some trees. They promptly forgot about those elk when Henderson’s trophy bull appeared. “We didn’t get a really good look at him but knew he was big,” he says. “We knew he was bigger by quite a bit.”

Henderson was eventually able to stalk in to 61 yards and stop the bull with a cow call. After the shot, the elk ran 120 yards and expired. After Henderson got the big rack home and made some rough measurements, he realized it could be a record, but took it to a taxidermist for an official score. Henderson’s bull takes the top spot in the SCI crossbow category, and will likely rank in the top 5 percent of Boone and Crockett bulls, according to the Wyoming Game and Fish Department.

However, where Henderson’s bull places in the record books isn’t as much of a problem as where he’s going to showcase the rack. Though he’s shot multiple elk in his life, Henderson’s latest bull, with a spread of more than 4 feet wide, will be his first and only mount in his rural home.