Native American hunters, operating under tribal treaty agreements with the federal government, have killed more than 20 elk near Gardiner,... 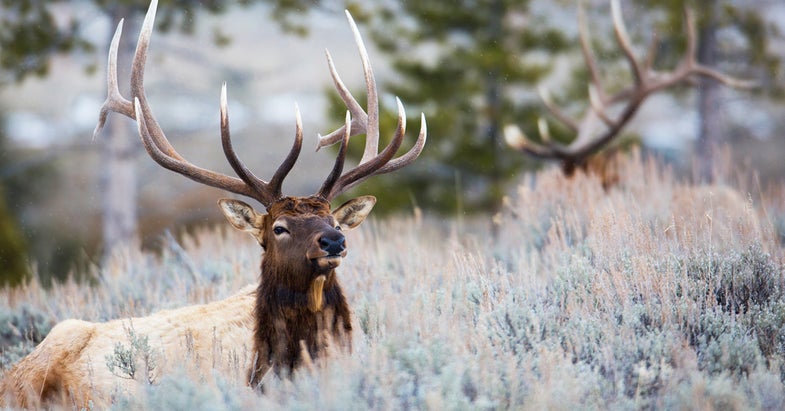 Native American hunters, operating under tribal treaty agreements with the federal government, have killed more than 20 elk near Gardiner, Montana, this year, which has many locals upset. The Bozeman Daily Chronicle reports that the elk have been targeted in lieu of bison, which now largely remain inside the safety of the nearby Yellowstone National Park. “Tribal hunters are taking elk pretty regularly,” Walt Allen, the U.S. Forest Service’s Gardiner district ranger, tells the paper. “The numbers are starting to pile up.”

Elk hunting has been a sensitive issue in the Gardiner area recently. Wildlife officials have limited hunting opportunities in the area based on the number of mature bulls per 100 cows in the northern Yellowstone herd. Since 1995, that ratio has plummeted from 60.1 to 2.7 bulls per every 100 cows.

According to the Montana Fish, Wildlife, and Parks, Native American tribes have the legal right to hunt on public land north of Yellowstone based on treaties made with the federal government. These hunters follow tribal rules and regulations, though state laws supersede them in cases of public safety and wildlife conservation.

Mike Volesky, chief of staff for Montana Fish, Wildlife and Parks, says that neither treaties nor state regulations limit which animals tribal hunters can take. The state doesn’t have that kind of authority over tribes, he says, and a challenge to the tribes’ hunting rights can be made only through the courts.

The Bozeman Daily Chronicle also notes that there are allegations that tribal hunters have killed other prized game species, such as bighorn sheep. Montana Fish, Wildlife, and Parks spokeswoman Andrea Jones acknowledged those claims but declined further comment because the investigation is still ongoing. Montana recognizes the rights of four tribes—Confederated Tribes of the Umatilla Indian Reservation, Confederated Salish and Kootenai Tribes, the Nez Perce Tribe, and Shoshone-Bannock Tribes. Officials say that it appears as if these hunters are from the Nez Perce Tribe, though tribal officials did not return their requests for comment.

The Billings Gazette has since reported further on this story, noting that on Friday of last week tribe representatives met with federal and state officials to discuss the hunts in question. According to the story, safety concerns about the hunts were at the forefront of the concern, as, according to Rep. Alan Redfield, hunters have shot across roads in the direction of buildings and of people. In one instance, he tells the paper, a game warden had to “jump behind a truck” to avoid being struck by a bullet.

Also, Redfield tells the paper that he suggested that the tribes’ hunting area be expanded in hopes of relieving pressure from the animals. The story further notes that the health of the local elk population has been an issue recently and resulted in fewer available nontribal elk licenses.