After only a few hours of shooting, we knew that this would be a brawl. In April, the F&S bow-test... 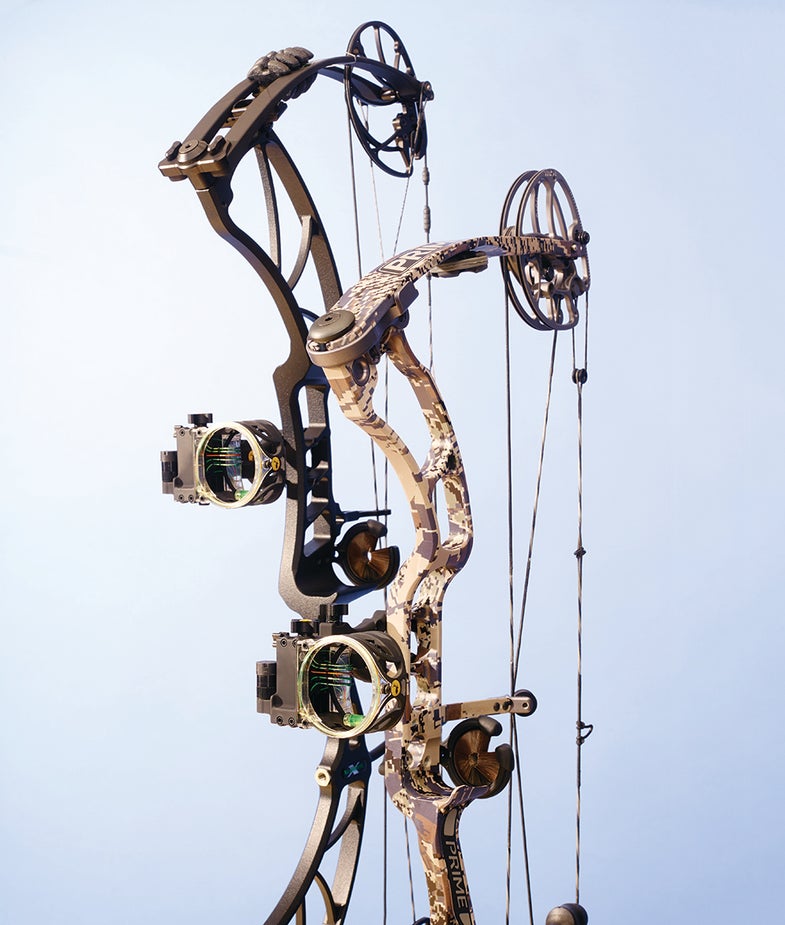 After only a few hours of shooting, we knew that this would be a brawl. In April, the F&S bow-test team gathered as usual in Murray, Ky., for a three-day shootout of 2015’s top new compound bows. We tested a dozen flagship models, including all the best-known brands and a growing number of upstarts. It was the tightest battle in the test’s history and resulted in the first-ever tie for best bow.

We fitted each bow with a Trophy Ridge Whisker Biscuit rest and React sight. Next, we set the draw weight at exactly 60 pounds and the length at 28 inches. At Hinton Archery, we measured noise with a decibel meter and speed by shooting a 356-grain arrow through a chronograph, taking the average of three shots in both cases. Finally, we hit the range for two days of shooting to evaluate draw cycle; shock and vibration; balance and handling; fit and finish; and accuracy and forgiveness. We scored each category from 1 to 10 and doubled the key ones—speed, draw cycle, and accuracy and forgiveness—for a total possible score of 100 points.

TOTAL SCORE: 89.125
We’ve been saying that Prime was on the cusp of greatness, and now the company has arrived. The Ion’s Ghost grip is a huge improvement over prior chunky ones, and Prime redesigned its 700 aluminum riser and PCXL cam for a better blend of speed and forgiveness.

HITS: One of the quietest bows in the test, the Ion has a back wall that can stop a bus, and a draw cycle we all enjoyed. We shot it very well, too.

MISSES: The Ion finished in the middle of the pack for speed, and those clunky-looking quad cams hurt the fit-and-finish scores a little.

THE SKINNY: Bows that are a joy to shoot usually get killed in the speed test. Not the Ion. This handy, forgiving bow simply did nothing wrong.

1) Xpedition Xcentric (Best of the Test)

TOTAL SCORE: 89.125
It’s like the Rookie of the Year also winning the MVP award—or at least tying for it. The Xcentric really impressed us, especially since it’s from a company just over a year old. The XS Hybrid Cam delivers serious speed, and the ATR cable guard helps smooth what might otherwise be a tough draw cycle.

HITS: The test’s second-fastest bow was also one of the quietest and most forgiving. The draw cycle lacks the harsh rollover common to speed bows.

MISSES: Though smooth, the draw is demanding and stacks late, which some shooters don’t care for.

THE SKINNY: If you’ve got to have that extra bit of speed, this is your winner. Two testers picked it as their overall favorite.

HITS: It got high marks in every category but speed. PowerShift was the most innovative feature in the test.

MISSES: In the Comfort setting, it ranked toward the bottom of the pack for speed. I didn’t love the balance and still long for the pre-RPM grip.

THE SKINNY: There’s a lot of buzz about whether PowerShift is gimmicky. What shouldn’t get lost in the debate is the fact that Bowtech has built another killer bow.

PSE bows are always fast and forgiving (see “Trends,” p. 72). The Decree HD, with its long axle-to-axle length and new HD Cam, was made to combine those attributes with a gentler draw cycle.

HITS: It’s plenty fast, and we all shot it lights-out. Notably, this is the best draw cycle of any PSE we’ve ever tested.

MISSES: Last place in shock and vibration cost this bow a shot at the win. The fit and finish is just O.K.

THE SKINNY: Some guys hate even a little hand shock or vibration. For others, like me, it’s no big deal. If you fall in the latter camp and had seen the gnats-ass groups we shot with it—especially Brantley—you’d run out and buy a Decree HD right now.

The Bionix two-track cam system delivers a silky draw, a hard stop, and a generous valley. The fluted riser and lightweight titanium limb bolts make for a handy bow.

HITS: The Blade is hands down the smoothest-drawing bow of the test; we had to double-check to make sure we were pulling 60 pounds. It’s very quiet, too, with great balance and handling.

MISSES: It died at the chronograph, finishing third from last.

THE SKINNY: If, like many hunters, you don’t give a rip about speed and want a quiet, pleasant-shooting killing tool, look no further. We all liked last year’s New Breed but couldn’t even remember it after shooting the Blade.

HITS: Fourth in our speed test, the Fusion sported an impressively pleasant draw cycle—including a quite generous valley—for such a speedy bow.

MISSES: Our test Fusion had a lot of vibration, and everyone hated the clown-colored camo (though there are other options).

THE SKINNY: As with the PSE, if vibration isn’t a big deal to you, the Fusion does a great job of combining speed with a nice draw cycle.

SPECS 33″ axle-to-axle • 6″ brace height • 4.2 lb. • 75% let-off • 302.8 fps
TOTAL SCORE 82.5
A new Offset Riser is designed to add stiffness and reduce vibration. The unique ZT Cable Guard puts the roller nearer the riser to reduce torque. The Turbo’s cam-and-a-half system is the fastest Hoyt has ever built.
HITS: It finished first in speed and is fairly quiet, too. This is also one very cool-looking bow.

MISSES: Harsh rollover toward the end of the draw really hurt the Turbo’s score. Speed usually comes at a price; in this case, it was a last-place finish in the draw-cycle category.

THE SKINNY: A fairly large contingent of speed freaks can pull back any bow handed to them—­without the slightest effort. If you’re among them, you’ll love the Nitrum Turbo.

TOTAL SCORE: 80.25
With a redesigned H15 cam, offset and adjustable string suppressors, and rubber riser inserts to control vibration and noise, the Arena has lots of new features.

HITS: We all liked the draw cycle, the speed was pretty impressive, and the Arena posted solid scores in noise and vibration.

MISSES: Another bow that would have placed high in a weaker field, the Arena lost its edge in fit and finish and in forgiveness.

THE SKINNY: To give you an idea of how tough the competition was this year, we all thought the Arena was a top-five bow after the first day. Only small details—and slightly larger groups—knocked it back.

Online Bonus Coverage: We were only able to cover the eight top-scoring bows in the print edition. Here’s how the rest of the field stacked up…

TOTAL SCORE: 79.5
Shorter than last year’s 35-inch Energy (which placed 2nd), the Synergy is Elite’s answer to folks that like a slightly handier bow. The Riser Cage design is the platform for the Synergy’s beyond-parallel limbs, which help provide a smooth shooting experience.

HITS: Like all Elite bows we’ve tested, the Synergy was pleasant to shoot. It was in the top three for draw cycle, and it scored well for fit and finish.

MISSES: Pleasant-shooting bows should be easy to shoot well, but the Synergy was middle-of-the-pack in our accuracy-and-forgiveness test. It also had some vibration and was the slowest bow we shot.

THE SKINNY: OK, let’s just put this out there: We think we might have gotten a lemon. In terms of construction and technology, the Synergy is very similar to the Elite bows that came whisker-close to winning our last two tests. Plus, several of us had shot other Synergys and liked them. So, our test bow’s lackluster performance was a bit of a head-scratcher.

TOTAL SCORE: 77
Darton used the same riser as last year’s flagship, the DS3800, but added EET laminated Quad Limbs and a new DualSync cam system to this year’s model. Shooters with a short draw length will make up a little speed with the DS3900’s low brace height.

HITS: Darton always makes a fast bow, and the DS3900 is no exception, placing third in the speed test. Unlike other Dartons we’ve tested, this bow had a good draw cycle for a muscle bow.

MISSES: No one liked the grip, and we’re convinced that affected its mediocre accuracy scores. Its vibration scores were also poor, and two testers dinged it on fit and finish.

THE SKINNY: This is the best bow Darton has put out in years. Remove the grip (which is easy to do) and it’s a solid, very fast shooter. More than one tester felt that Darton could be boxing with the big boys next year if they can make the right tweaks.

TOTAL SCORE: 77
The company famous for single-cam technology took a radically different track this year. The No-Cam features two large wheels centered on the upper and lower axles. In the middle each is a smaller, off-center wheel that provides camming action. Because the string travels in a constant, circular rotation, the design is said to eliminate timing, cam-lean, and nock travel issues.

HITS: The No-Cam may be the most dead-in-the-hand bow we’ve ever tested, and it was one of the quietest of this year’s bows. The Focus Grip is a huge improvement over the chunk of firewood on previous models. As always, Mathews finishes a bow like no one else; the No-Cam is one good-looking bow.

MISSES: It was the second-slowest bow in our test, and surprisingly, the draw cycle on the No-Cam was only fair. None of us shot the No-Cam well. And something else we all noticed: There are small plastic sleeves near each end of the buss cable. On our test model, the wheels rubbed against these sleeves.

THE SKINNY: If you’re a diehard Mathews man, you’ll likely rave about how quiet and vibration-free the No-Cam is. And it is indeed both. We were especially impressed with how smooth-shooting the bow is. But the No-Cam’s speed and forgiveness scores, in particular, dropped it toward the bottom of the pack.

HITS: For a bow making its maiden voyage into the flagship waters, the Xcite had a reasonably smooth draw cycle and finished toward the middle of the pack in the speed category.

MISSES: Low scores on vibration and balance/grip hurt the Xcite, but its accuracy-and-forgiveness scores did more harm.

THE SKINNY: Cabela’s stepped into the ring with some very big hitters this year, which made it tough to come out anywhere near the top. The Xcite is decent, solid hunting bow, but it’s performance simply doesn’t warrant the flagship-bow price tag.

1) Fast Forgiveness
✖ PSE’s flagship bow has finished first in our accuracy-and-forgiveness category three years running. PSE being PSE, these have all been speed bows, not one with an IBO under 340. Besides being impressive on its face, this result defies the belief that fast bows are less forgiving. Our four shooters—each with his own shooting style and individual form errors—have all shot the PSE lights-out, year after year.

2) End of the Short-Bow Era
✖ From 2009 to 2014, the average axle-to-axle length of our test bows was 31.75 inches; this year it’s 33.25. The average number of bows over 32 inches in previous tests was two; this year we had eight. There’s nothing necessarily wrong with a short bow—one of this year’s winners proves it. But lots of hunters (not just 3D guys) want longer, and now we’ve got it.

3) The New Face of Bowhunting
✖ A few familiar brands have long dominated this test. Rarely did we see a newer bow company break the top five. Suddenly, they practically own it. From 2009 to 2013, the number of top-five upstarts was one. In the last two years, there have been six. Blind loyalty to a familiar brand—so common with bowhunters—is now outdated.