If you want a compact, lightweight crossbow, 2015 is your year to buy. If you demand one-hole groups and blistering... 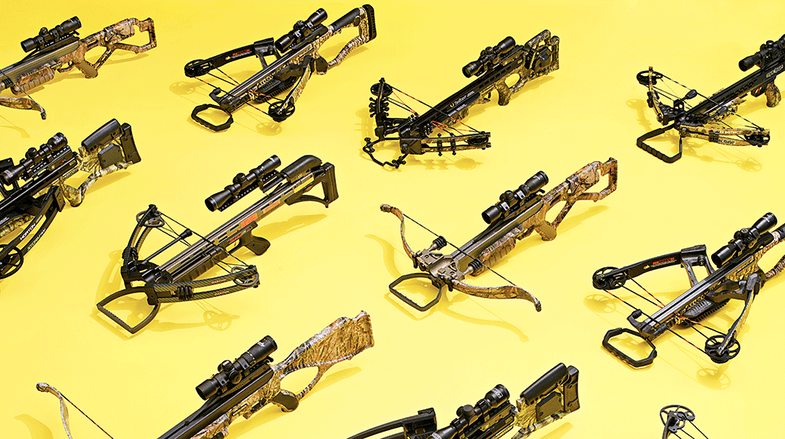 If you want a compact, lightweight crossbow, 2015 is your year to buy. If you demand one-hole groups and blistering speed, well, it’s a good year for that, too.

Earlier this summer, we tested 10 new top-of-the-line crossbows over three days on the indoor range at Hinton Archery in Murray, Ky. We measured speed with a chronograph using the same 477-grain finished bolt. (For all other tests, we used the factory-provided bolts and accessories.) Next, we gauged noise with a decibel meter and trigger weight with a digital scale. To compare accuracy, we fired three-shot groups at 20 yards from a solid rest.

Meanwhile, we evaluated handling and bulk, safety, fit and finish, and cocking effort. Each test category was worth up to 10 points, except speed and accuracy, which we doubled, for a total possible score of 100. Plus, we awarded a bonus point for any outstanding feature or accessory. Here are the top eight finishers, in order—with a three-way tie for sixth place.

The Machine looks fairly ho-hum and utilitarian, but it has some standout features, including a new patent-pending trigger and a Flip-Tech Stock that, when folded, reduces the overall length to just 25 inches.

HITS: The fastest bow of the test produced one-hole groups at 20 yards—and it’s quiet. The trigger is the best I’ve ever tried on a crossbow. We added a bonus point for that and the folding stock, but it would have won anyway.

MISSES: It is a bit heavy and bulky, and the fit and finish isn’t great (though we did test a prototype).

THE SKINNY: A very impressive crossbow from a new company, the Machine was a top performer in nearly every category. Given that and its moderate price, I’d award it best value, too.

Horton’s first flagship model since the company was purchased by TenPoint in 2013, the Storm RDX is a high-performance, reverse-draw compound with an adjustable bullpup stock.

HITS: The reverse-draw limbs allow for a long powerstroke and blistering speed in a compact package. The trigger, handling, and fit and finish are all outstanding.

MISSES: That long powerstroke made it more difficult to cock than the other compound models tested. Accuracy was middle-of-the-road.

THE SKINNY: A neck-and-neck contender for first place, the RDX ultimately lost out due to its 1.08-inch average groups. Still, of our top two finishers, this is the better-looking and better-handling model.

The latest in a long line of high-quality bows from TenPoint, the Stealth FX4 is quite similar to last year’s Venom, but it comes at a more manageable price.

HITS: Scoring well in every category, it also got a bonus point for outstanding accessories, including your choice of TenPoint’s excellent Acudraw or Acudraw 50 cocking mechanism.

THE SKINNY: There’s nothing wrong with a report card full of Bs and A-minuses—but it won’t make you the teacher’s pet. Like every TenPoint crossbow I’ve ever tested, the Stealth FX4 was a solid performer and is built to last a lifetime—but the two bows that beat it are less expensive.

Stryker and Excalibur are owned by the same parent company; the Offspring is what you get when Stryker’s compound bow and Excalibur’s stock and trigger get together.

HITS: One of only two bows (the Killer Instinct was the other) to get a perfect accuracy score, the Offspring was also quiet.

MISSES: The safety on other Stryker models engages automatically when the bow is cocked. This one, like those on all Excaliburs, must be engaged manually. Bad change.

THE SKINNY: A smooth, all-around hunting bow; while not especially fast, it is quiet, easy to cock, deadly accurate, and reasonably priced. If you can get used to the safety, it’s a solid choice.

Aside from the Cabela’s packaging, this bow is a very slightly updated version of an Excalibur Matrix, which has been around a few years.

HITS: High scores in the speed and accuracy categories landed this bow in the top five. We gave the Equalizer a bonus point for outstanding accessories; the scope is especially good compared with those typically found on crossbows.

MISSES: It was the most challenging of the group to cock, and the loudest by a wide margin.

THE SKINNY: As with any recurve, performance and simplicity come at a price with the Equalizer, since heavy limbs are difficult to cock and loud at the shot. But if foolproof and fail-safe are your priorities, you’ll like this bow.

This bow’s reverse-draw design allows for decent power and speed in one of the lightest, most compact hunting models ever made.

HITS: It handles better than any compound crossbow I’ve ever put in my hands.

MISSES: Fit and finish and general quality weren’t great. It’s built with a lot of plastic, and some key assembly bolts needed to be retightened after a few groups.

THE SKINNY: Heft and bulk have long been the No. 1 and No. 2 biggest problems with crossbows, and this bow certainly addresses both. Average groups measured 1.2 inches. Though its quality wasn’t great, it costs $200 less than the next-cheapest test model.

Another entry into the fast-growing compact-crossbow market, the Rebel 135 is Darton’s lightest crossbow to date.

HITS: Like every Darton I’ve shot, this one was very accurate, with .66-inch average groups. It’s also solidly built.

MISSES: When the bow is shouldered, the cocked string is uncomfortably close to your chin. Long whiskers would be in trouble.

THE SKINNY: I’ve come to expect good all-around performance from Darton crossbows, and this one delivered. It excelled in the most important category—accuracy—and was middle-of-the-pack at everything else.

The talk of the 2015 ATA show, this tiny bow is designed to address the typical recurve’s biggest flaw: bulk.

HITS: No doubt the coolest-looking bow of the test, everything about the Micro 335 is light and handy. Fit and finish is exquisite, and it produced sub-1-inch groups.

MISSES: It was our slowest bow. Excalibur crossbows usually have excellent triggers, but this one was a bit heavy.

THE SKINNY: Speed killed the Micro 335 in our test, but it’s made for the guy who wants a rugged, handy hunting tool, rather than raw power. With its accuracy and size, it’d be right at home in the whitetail woods and for head-shooting turkeys at 20 yards.