There was a time when Japanese trucks were characterized by five-speed manual transmissions and peppy four-cylinder engines. Their performance and... 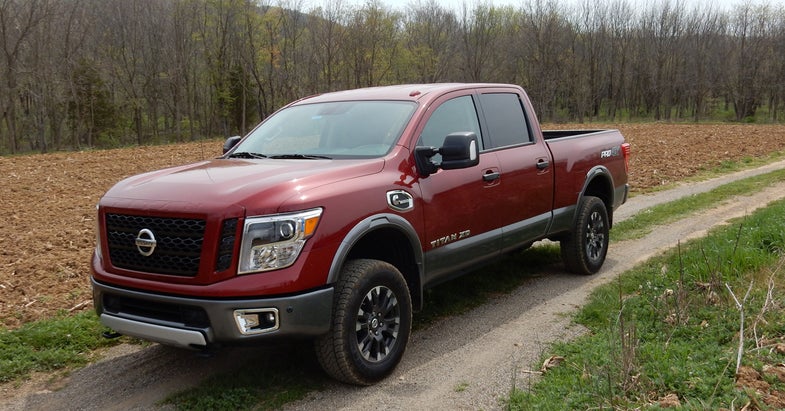 There was a time when Japanese trucks were characterized by five-speed manual transmissions and peppy four-cylinder engines. Their performance and fuel economy helped the manufacturers—mainly Toyota and Nissan—establish a foothold in the U.S. market. The trucks, at least back then, were small and inexpensive, and appealed to young buyers who were turned off by the small trucks then being offered by domestic manufacturers.

But even then the Japanese had designs on the larger market—full-size trucks. Toyota got there first, in 1999, with the Tundra. Nissan followed suit with the full-size Titan in 2004, which was, and still is, built in the U.S. Though well designed, the Titan had its work cut out for it, as it was expected to compete not only against the Tundra, but against the Ford F-150, Chevy Silverado, and the Ram 1500 as well.

The increased competition has forced all the manufacturers to update their offerings more frequently. Nissan, which really hadn’t allowed the Titan to keep pace, paid the price. But now the company is offering a brand-new completely redesigned Titan line—18 versions in all.

I had the opportunity to drive one of the new trucks recently, putting 400 miles on the Titan XD PRO-4X 4WD crew cab with the Cummins 5-liter V8 turbo diesel while on a fishing trip. The revamped truck should help kick-start renewed interest in the Titan, as the XD line is a clever way to carve out a special niche for the truck.

Diesels don’t appeal to everyone. As a rule, they tend to be a lot noisier than gasoline engines. But diesels have long been preferred for heavy towing duty because the engines produce massive torque at very low rpm. In this case, the engine delivers 555 foot-pounds of torque at only 1,600 rpm. High torque at low rpm is also useful when dealing with challenging offroad situations.

Diesel technology, however, has evolved over the years, and Cummins, in particular, has been a leader here. Nissan says the engine is the first commercial application of the new Cummins M2 two-stage turbo system, designed to reduce the lag so often seen in turbocharged engines. Given the performance I experienced, I think the system works.

Because diesels don’t use spark plugs, they rely on glow plugs to heat up the cylinders to a point where ignition can happen. Thankfully, the technology has evolved to the point where initial start up now is very quick—so quick, in fact, that you tend to forget the glow plugs are even there. In the new Titan, once you press the start button (keyless ignition) a small light appears on the instrument panel letting you know the process has begun. According to a Nissan engineer, the new glow plugs “allow for a quick start in less than three seconds, even in below-zero temperatures.”

Nissan also tackled the noise problem with improved sound deadening materials to isolate the cab from engine noise. In addition, the engine and exhaust system have been designed to reduce the bothersome clatter so often associated with these power plants.

The truck comes with a full-size bed (great for hauling a load of mulch for my yard before I left to fish), but the 151.6-inch wheelbase on which the bed rests means you’ve got a lot of truck behind the cab. This can be disconcerting for truck owners used to shorter wheelbases, but the rear-view camera and blind-spot warning chimes can help you better negotiate tight spots.

On the highway to the river, the truck’s ride proved to be surprisingly comfortable. It remained comfortable when I switched to a rutted dirt-and-gravel road. When I asked the engineer how Nisan accomplished that, he said, “As for our suspension tuning, the whole premise of XD is that the ride and handling are meant to be much better than three-quarter-ton trucks while providing capability superior to half-ton trucks.”

He also noted that to maximize stability, handling, and ride comfort, the Titan XD uses a new heavy-duty suspension design. “The double-wishbone with stabilizer bar front suspension is reinforced and tuned for hard use, and the rigid rear axle suspension utilizes hefty leaf springs and leaf bushings, along with twin-tube shock absorbers.”

Such a configuration can be a recipe for a rough ride when the bed is empty, but the Bilstein offroad monotube shocks play a key role in really smoothing out the ride. The truck is fitted with LT275/65R18 all-terrain tires, which put the body high off the ground. The model I drove came without running boards; unless you have the stride of Paul Bunyan, climbing into the cab is a bit of an ordeal.

Clearly, Nissan is trying to create a niche for the Titan XD in order to separate it from the competition. The basic strategy—emphasizing a truck that can fill the performance gap between three-quarter-ton and half-ton models—should not only appeal to Nissan’s core users, but to any sportsman interested in the diesel option.

Now, as to price. Up top I said that years ago Japanese trucks were inexpensive. No longer. Full-size trucks cost a bundle these days, and this truck is no exception. The fully loaded truck I drove lists for $57,820. Call it the price of progress.