Back when the pickup truck/SUV market was a slack backwater, vehicle manufacturers tended to wait a long time between model... 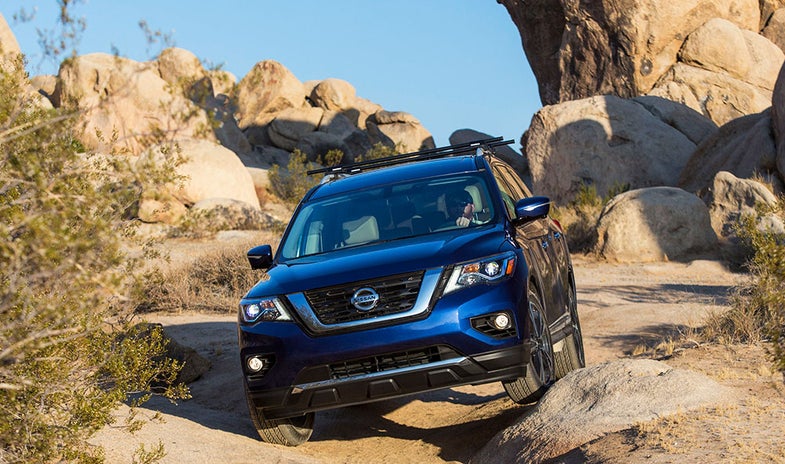 This fifth generation Pathfinder is "part of a fundamental revamp of the entire truck line.". Nissan
SHARE

Back when the pickup truck/SUV market was a slack backwater, vehicle manufacturers tended to wait a long time between model revamps. There simply was no financial incentive to change models on a timelier basis.

But now that pickups and SUVs have gone mainstream, manufacturers have no choice but to freshen the lines far more frequently. Case in point: Nissan Pathfinder. When this SUV debuted in the U.S (as a two-door model, courtesy of what is known as the “Chicken War” and a retaliatory 25-percent tariff on imported pickups) in 1987, it essentially remained unchanged until 1995. The so-called second generation (now with four doors) came off the lines between 1996 and 2004. The third generation ran from 2005 to 2012. But by the time the fourth generation came around in 2013, competition was keen and Nissan knew that the model could not go seven to eight years without some sort of upgrade.

Company spokesman Ty Webb told me yesterday, at the first look at the 2017 Pathfinder, that this fifth generation Pathfinder is “part of a fundamental revamp of the entire truck line.”

Indeed it is. I got the opportunity to see the new SUV in a warehouse at an event designed to introduce the new truck to the automotive press. As such, no one was able to drive it. (A report on how it handles will come later after I’ve had a chance to hunt or fish with it.)

I wouldn’t characterize the 2017 model as a complete re-do as it carries over many of the fourth-generation components, but it does sport a new more aerodynamic look. Most important for sportsmen, the carryover engine—a 3.5-liter DOHC V6 (285 hp, 259 pound-feet of torque) adds a direct injection system with electronic variable timing. Both horsepower and torque have been increased, which gives the new truck a 6,000-pound towing rating—an increase of 1,000 pounds over the previous model. A series of other powertrain refinements are designed to give the engine more power without compromising fuel efficiency.

Nissan has also added a motion-activated liftgate (standard on SL and Premium versions, optional on S and SV models). Waving a foot under the center of the liftgate will activate the gate—either to open or close. As with other modern SUVs, the 2017 Pathfinder comes with a wide range of options designed to appeal to newer owners who require total connectivity, whether on or off the road.