You’ve no doubt heard the expression: “when given lemons, make lemonade.” Hunters often have cause to cite this adage when... 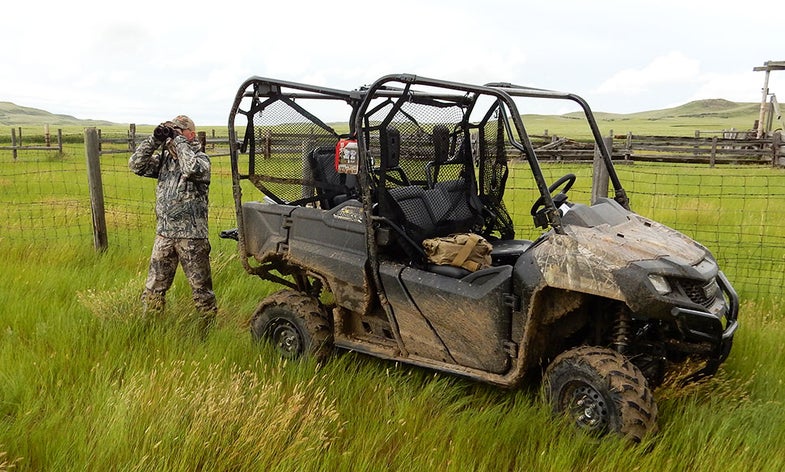 Glassing for coyotes in northern Montana. The Honda Pioneer 700 is geared to get through mud .. Slaton L. White
SHARE

You’ve no doubt heard the expression: “when given lemons, make lemonade.” Hunters often have cause to cite this adage when facing a hunt that doesn’t go as planned.

As planned, my coyote hunt last week in northern Montana was designed to test the new Crimson Trace LinQ wireless laser-and-light system paired with a Smith & Wesson M&P15 MOE Mid 15 Magpul rifle. But a series of unseasonable rainstorms created by an errant jet stream required a change in plans. We still camped, and we still hunted, but we didn’t see a coyote. They were hunkered down, waiting out the weather.

But those miserable conditions ended up being the perfect opportunity to test the 2016 Honda Pioneer 700 SxS we used to get around the large ranch on which we hunted and camped. After our team (which included Outdoor Life Editor-in-Chief Andrew McKean and Dustin Butler, director of channel marketing for Smith & Wesson) set up the tent, we decided to conduct a large loop of the property, setting up calling spots in likely locations. Although we didn’t see any coyotes, we certainly saw the mule deer does pulled in by the plaintive sounds of a fawn-in-distress call.

The ground was a soggy mess of gumbo mud. The few dirt roads that connected the property to civilization were deep wells of mud that stuck like glue to the tires, requiring us to drive alongside in the tall (and very verdant) grass. Given the conditions, the Pioneer proved move than adept in crawling up hills and through uneven open country. It also handled the various creek crossings without any serious worries, though there were times where prudence required us to back down steeper hills that simply proved too slippery in the wet conditions.

You can find all the relevant specifications here, so I won’t bother listing them all. But I do want to detail some of the features that I think make this SxS a serious hunting vehicle.

The engine is a fuel-injected 700cc liquid-cooled OHV single-cylinder four-stroke. It’s mated to a four-speed automatic transmission. The overall gearing is very effective for this kind of terrain, as it often allowed us to move along in 2WD over long stretches. In other spots—mud, knolls, and those unexpected troughs that appear from time to time in the prairie—4WD was required, and it’s achieved through a simple shift of the instrument-panel-mounted gear shift. Honda has included another shift option for serious offroaders—4WD with a locking differential, which would be your gear of last choice in truly nasty stuff. The suspension has been designed as a balance between comfort and handling. I found the ride to be relatively comfortable even when moving over uneven terrain.

One of the advantages of the SXS platform is that it allows for more passengers and more cargo than a typical ATV. The convertible design lets you fold down the two rear seats (just like an SUV) for enhanced storage. The seats are independently hinged, so you can fold down just one, as we did. Once unloaded, we used the tailgate as a cooking platform for our freeze-dried meals.

To some, the SXS configuration may seem little more than a glorified golf cart. It’s not. These vehicles may not be able to get as far offroad as an ATV, but they provide real seats, seatbelts, roll bars, and a steering wheel. They also allow you (and a mountain of gear) to get to those places where the heart beats faster. Prices start at $10,299.