Photographs by Dan Saelinger A diehard contingent of traditionalists still dress in skins and tote period smokepoles, but the vast... 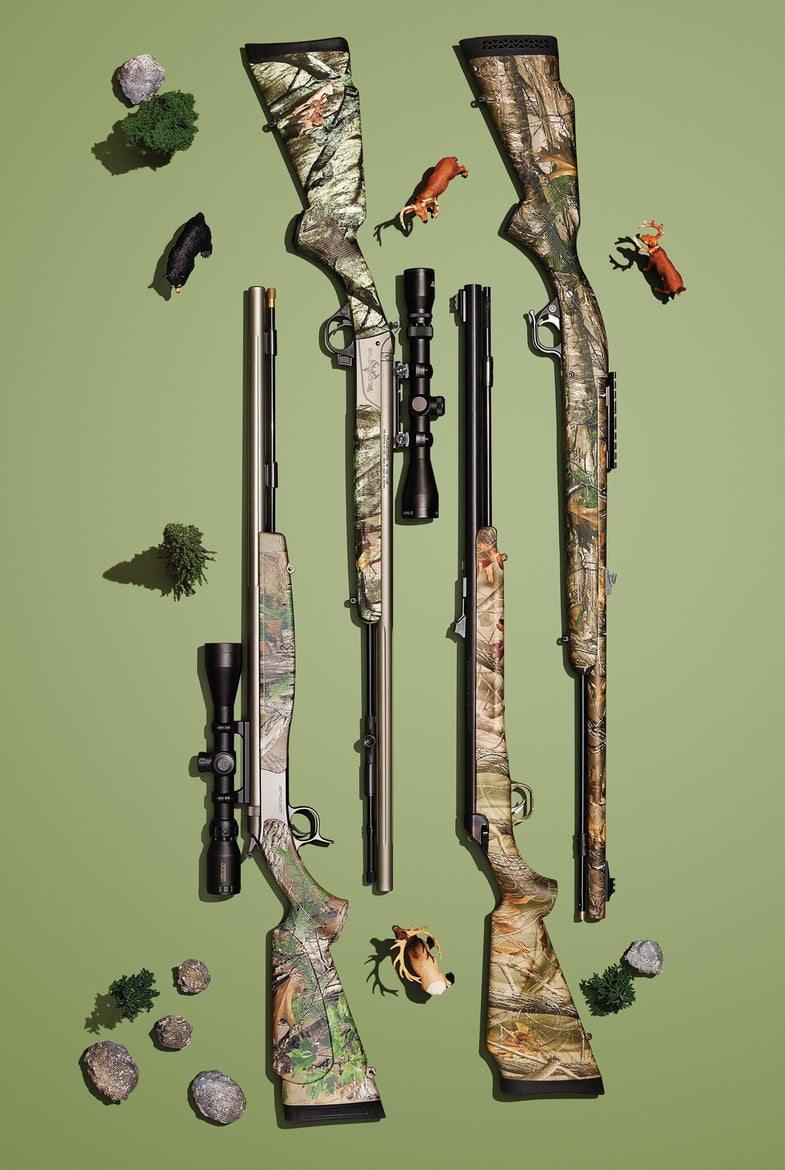 A diehard contingent of traditionalists still dress in skins and tote period smokepoles, but the vast majority of today’s muzzleloader hunters use modern in-lines, for three reasons: These guns go bang pretty much every time; they are comparatively easy to maintain; and you can buy a decent one for just a few hundred bucks. The only question is, which should you choose? For this yearlong test, we asked four experienced blackpowder hunters to use the four entry-level in-lines at right to see which delivered the best accuracy, reliability, and value. And given the foul nature of muzzleloading propellants, ease of cleaning was a top issue, too.

The Optima earned the highest rating with its excellent performance and value.

“It’s a beautiful gun all around,” said Peterson. “Easy to load, and the trigger was light and crisp—no creep.”

“The break-open mechanism is smooth, the breech plug is easy to extract by hand, and it’s a shooter,” said Lundgren. “I can’t find a single element of this gun that I dislike.”

Bueti and Akins agreed; the latter asked, “What more could you want for only $300, with a scope?”

MISSES: “Could use a better recoil pad.” —Bueti

Testers compared the Ultralight favorably with the Optima in terms of features, function, and value (it, too, includes a scope). “Great construction,” said Peterson. “Hammer safety plus crossbolt safety is doubly nice.”

Bueti called the ignition system “the best I’ve used. It’s very easy to access for cleaning.” He also said the Ultralight’s accuracy rivaled that of a centerfire rifle.

Lundgren praised the lightweight design, while Akins felt some users might find the recoil a bit much.

While the Impact was accurate, the testers agreed that the break-open mechanism was hard to operate, and the small hammer was difficult to engage.

“The rifle is light and well balanced,” said Bueti. “The excellent trigger helped me get 2-inch groups at 100 yards.” Lundgren shot it well, too, but found it difficult to clean, largely because the breech plug requires a tool to remove.

Peterson said the recoil pad was the best of the bunch.

Votes were split on the Vision. Peterson appreciated the “clean, simple, and durable design,” and he liked the crossbolt safety.

To Lundgren, the rifle “felt very solid in my hands, like it will stand up to the test of time.”

Akins, however, said the trigger “was only average because of creep,” which affected accuracy. Bueti said the rifle was easy to load, but the “breech access could be better. I had trouble extracting the primer after a shot.”

MISSES: “Not as much value here.” —Akins