When it comes to fishing line, I can be pretty stubborn. It took me years to finally accept braid as... 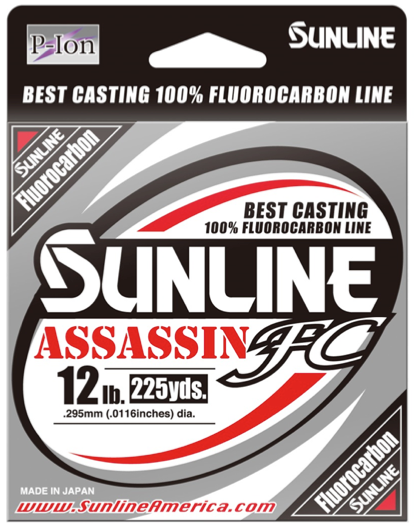 When it comes to fishing line, I can be pretty stubborn. It took me years to finally accept braid as the top choice for many applications. In the same way, it’s been tough for me to gel with fluorocarbon line. I keep an arsenal of fluoro leaders, but my first experiences with the material as a main line did not impress.

When I heard about Sunline’s new Assassin FC and it’s cutting-edge technology, I was curious, but I wanted to know if it still had any of the same old problems of fluorocarbon, particularly in terms of memory.

So I spooled a bass-sized spinning reel with 8-pound Assassin FC and put it through the wringer. I fished everything from tiny jigs and drop-shots to Senkos and heavy-weighted tubes in 30 feet of water. The performance was flawless. There are a lot of upsides to this line, but what surprised me most was the complete lack of line twist and loops so common when making longs casts on spinning gear with light lures.

Hits
Assassin FC provides all the benefits of fluorocarbon line (sensitivity, abrasion-resistance, and near-zero visibility) without the memory problems that plague other versions. The performance I got with 8-pound-test on a spinning rod leaves me no doubt that heavier lines would work just as smoothly on casting gear.

The Bottom Line
This is a line I would recommend for serious bass and walleye guys, including tournament anglers. Also, anyone who needs an advantage for clear or high-pressured water should think about shelling out a few extra bucks for this high-quality line.