“Fully-machined” and “air-craft grade” are two terms that many people believe go hand-in-hand with a quality big-game fly reel these... 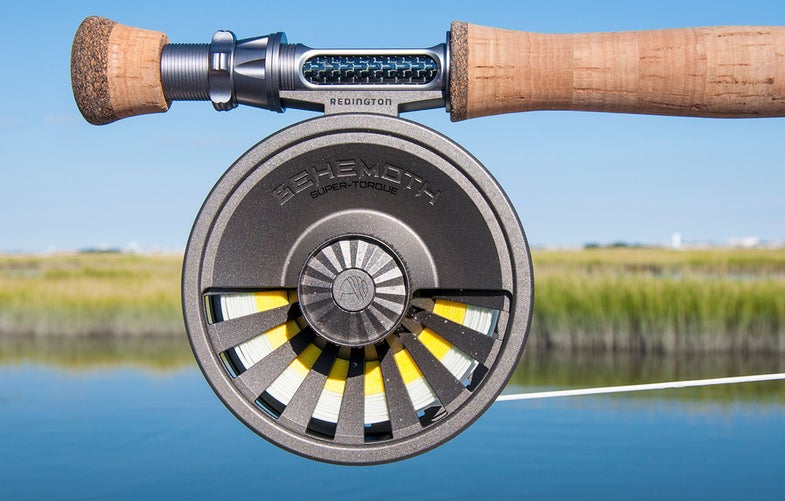 “Fully-machined” and “air-craft grade” are two terms that many people believe go hand-in-hand with a quality big-game fly reel these days. They’re also two features that generally make anything from a 7-weight on up cost a pretty penny. Redington’s new Behemoth is bucking that trend in a major way. I recently got the chance to fish a 7/8 Behemoth for stripers at the Jersey Shore, and can say with full confidence it is one of the most impressive big-game reels I’ve ever used. Those are strong words considering the 5/6 and 7/8 models only cost $110, and the 9/10 and 11/12 will only cost you 20 bucks more. One element that makes these reels so affordable is that they are diecast as opposed to machined. For some big-gamers, that might be an instant turn-off, but in this case, diecasting allowed Redington to add new, smart features that couldn’t be created by machining. In particular is the deep-V latticework spool, which is specifically designed to hold more backing than other fly reels. I packed a whopping 200 yards of 20-pound Dacron onto the 7/8, and saw that backing on the water several times during runs from bass measuring up to 28 inches in ripping tidal current. While the fish may not have tested all 30 pounds of drag torque the Behemoth boasts, it handled the runs flawlessy. Not once did the reel baulk or hiccup when the drag engaged, which I find incredibly important when putting fast fish on a fly reel.

The overall strength and extra backing capacity the unique deep-V spool design adds are impressive. But in my opinion, the most impressive thing about the spool was how evenly it laid line and backing. Not once while spooling did I guide the line on by hand; the concave sides naturally channeled it until I ended with a perfectly packed reel. It was as if the reel had an invisible level-wind mechanism. Of course, that even flow was just as nice when cranking line on fast during a striper fight, and while it was peeling off at mach 1 when a fish decided to bolt.

The Behemoth’s adjustable disk drag is capped, not sealed. For some saltwater anglers, that’s a no-go. For me, it’s not a problem, because I take care of my reels and take the time to clean them properly. I’ve put many fly reels with non-sealed drags through torture, and with proper maintainence and rinsing after saltwater use, they keep on ticking. I expect the Behemoth’s drag to do the same.

Despite the entry-level price, the Behemoth is not an entry-level fly reel. It’s a beast. It’s a tank. It kicks serious butt, whether you’re a seasoned butt-kicker of false albacore, or looking to whupp your first steelhead. And if you still have reservations, consider the Behemoth comes with a lifetime warranty.