Prop styling by Robin Finlay. Proof research by Adam Voorhes Hunting game has nothing to do with war. But the... 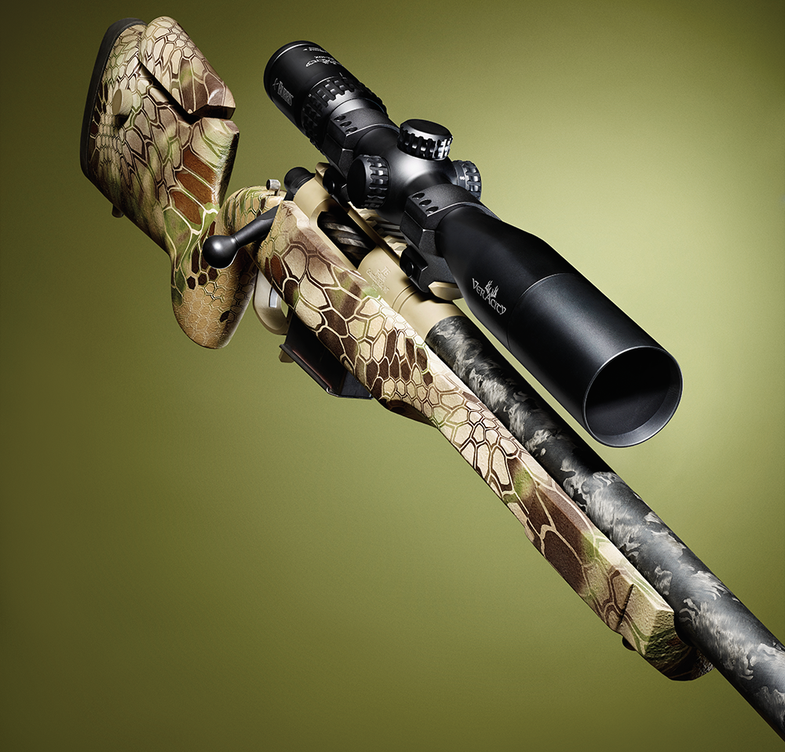 Hunting game has nothing to do with war. But the fact remains that the latest “tactical” rifles are the world’s most accurate, and they are available to hunters. These guns typically have heavy barrels so they can be fired rapidly with minimum deviation in accuracy; their angular stocks are designed to meld steel to flesh for optimum consistency; light triggers mitigate human error; Picatinny rails facilitate a range of optics and accessories; and detachable magazines make reloading fast. It’s everything a soldier needs—and much of what a precision hunter wants, so long as he doesn’t mind lugging it, or paying the hefty price. There’s no reason not to take an appropriately chambered tac rifle to a beanfield, for example, or to lay siege on a ­prairie-​dog town.

HITS: It produced my best group ever, a .230-inch jagged hole, as well as the best average groups, at .590 inch. The Timney trigger broke crisply at 3 pounds.

WHO SHOULD BUY: ­Tactical guys who want the most accurate rifle regardless of size, and who might use it for hunting in a few specific applications.

THE LOWDOWN: The Tac II’s barrel is wrapped in carbon fiber, which adds stiffness, dissipates heat, and is much lighter than steel. The company also hand-lays the stock in carbon fiber and Kevlar. Add a Defiance action, a Timney or Jewell trigger, carbon-fiber bedding, and Badger bottom metal, and what you have is a 9-pound tactical rifle that shoots like a 12-pounder. The other test models are great rifles; this is state of the art.

WHO SHOULD BUY: Serious tac guys who are also serious hunters—and have an unlimited budget.

THE LOWDOWN: The new Precision Rifle is an accurized bolt on a modular, AR-looking frame. Ruger has finally made not just a decent trigger but a superb one. It also reengineered the receiver so that recoil is directed straight into the in-line stock to mitigate felt kick. A threaded-barrel attachment system is fine-tuned for headspace. The rigid buttstock adjusts and folds for packing.

HITS: The trigger broke crisply at 2.2 pounds. The rifle averaged .660-inch groups. It comes with 10-​round Magpul mags, and it’s affordable.

WHO SHOULD BUY: ­Tactical nuts on a budget who want the perfect rifle for prairie-dogging.

THE LOWDOWN: Tikka is known for making high-quality rifles at bargain prices, and its T3 Compact Tactical Rifle is the least expensive here. It’s also the lightest, so it’s hardly even a fair comparison with the other test models. Yet the gun is admirably accurate and will be familiar in any hunter’s hands.

MISSES: It was the least accurate, averaging .900-inch groups. The trigger is heavy for a tactical rifle at 5 pounds, and it needs an adjustable comb.

WHO SHOULD BUY: This is the rifle for serious hunters who want to dabble in the tactical world.

I put a Burris Veracity 2–10x42mm scope on each rifle, turned the power to 10, and shot from a Lead Sled at 100 yards, outdoors, in a 10-mph crosswind. After each three-shot group, I rotated to the next rifle. I also carried each gun in the field and shot away from the bench to gauge their practical value for hunting. Meanwhile, I evaluated build quality, stock dimensions, fit and finish, trigger pull, special features, and overall performance. —J.J.