Getting Real About the Virtues of Catch-and-Release Fishing

It’s interesting to me how a blog post that was really about human pain management can evolve (and I use... 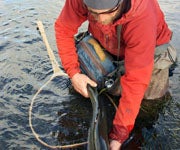 It’s interesting to me how a blog post that was really about human pain management can evolve (and I use that term loosely) into a debate about the virtues (or lack thereof) of catch-and-release fly fishing. But what the heck, I’ll bite on that fly, and you all can decide what you’ll do with me later on.

The late, great Lee Wulff articulated the catch-and-release ethic best when he said: “A good game fish is too valuable to be caught only once.” I certainly believe that. One of the main satisfactions I find in fly fishing is knowing that I can let a wily old brown trout or a wild steelhead swim free, with the legitimate hope (and it’s only a hope) that someone else might enjoy that same fight down the line. I suppose that’s why I like fly fishing more than hunting. But I do hunt. And I do catch fish with the sole intent of eating them. I don’t think either approach is wrong, as long as the angler/hunter is playing by the rules.

Let’s be honest. Fly fishing is a blood sport. Sticking a size #18 BWO in the mouth of a dainty brook trout is no different than planting the treble hooks of a steel lure into the jaws of a wild tuna. In fact, some would argue that the more “humane” act is to dispatch the fish and eventually eat it. The great writer Jim Harrison said something along the lines of “just because I beat the (bleep) out of you and didn’t kill you doesn’t make an angler a savior.” And that’s true also. In places like Switzerland, it’s required to kill the fish you catch.

I’ve seen numerous studies that suggest that, even with the best catch-and-release practices, fish mortality happens — perhaps at a rate of 10 percent or more. So you tell me who is impacting the resource more profoundly: The angler who fishes once a week, catches a limit, and eats what’s in the creel? Or the angler who sticks 30 fish a day, every day for a month, but lets them all go with the “clear” conscience of being a catch-and-release angler? How many fish are suffocated for photographs, put back in the water, only to die downstream? If you’re going to kill a fish, you should own that act, shouldn’t you?

In some cases, the best thing we can do for certain fish populations is to selectively harvest. I eat most of the brook trout I catch in the Rockies. They do taste good on crackers.

I have absolutely nothing against bowfishing for carp. Carp anglers wouldn’t have it as good as they do if it weren’t for bowfishers.

Do the old photos of tarpon hanging from hooks make me cringe? Yes they do. Does the thought of whacking wild steelhead get under my skin? Yes it does. Would I rather see my fishing partner let the 24-inch brown swim away and keep a couple 12-inchers for dinner? No doubt I would.

But in the end, I think we need to realize that a lot of the fish management situations happen with reason, and a lot of that is based on good science. If you’re going to be a catch-and-release angler, do it right. And thank you very much for doing so. If you’re a harvest angler, that’s great, too. Abide by the rules and have fun.

You’re not going to catch me arguing about the virtues of one approach over another. That’s the stuff that makes the PETA people light up with glee.

I say that all anglers are in it together. We should stick together, no matter what. In the end, what really matters is having the habitat that makes fishing opportunities of all sorts possible in the first place.