I let my friend Henry Koltz pick the winner of this contest. After all, he tied the fly. He gave... 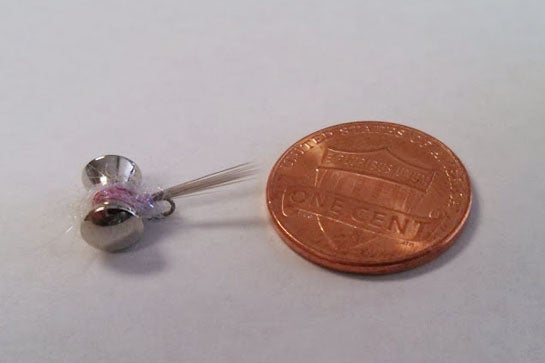 I let my friend Henry Koltz pick the winner of this contest. After all, he tied the fly. He gave it some serious deliberation and offered the following thoughts:

The Kitchen Sink – If you are tying this on, you are truly throwing everything including the kitchen sink, and it actually casts a lot like having a real kitchen sink on the end of your line. That means your name has two meanings, which is crafty, so good on ya’, mate.

Head Banger – Plus side of name: This thing probably would actually hit fish on the head, rendering them stunned. Negative side of name: See how my friends treated me when I thought I was going to be a rockstar (see Iron Butterfly).

Big Hat, No Cattle – For reasons known only by IPA, I witnessed a guide almost come to blows with a guy — dressed up in pearl snaps and George Strait jeans — from Pennsylvania who we called “the Cheesesteak Cowboy” and who we said “was all hat and no cattle.” Actually, I guess it’s not really that hard to figure out. The settlement agreement states that I can’t say anymore than I already have.

The Titanic – Love the description from the poster — all it does is sink. Also, I remain hopeful of a call from Universal where the making of this fly will be made in to a 3-hour runtime motion picture featuring a soundtrack from Celine Dion which involves a pan flute. This fly works near, far, wherever you are.

The Justin Beiber – This fly is lousy at what it professes to do, but my daughters loved it for some reason. On the plus side it hasn’t sped through my neighborhood or thrown eggs at my house. I’m just sayin’.

Non-Articulation Nation – It’s hard to imagine a fly with less action than this rock.
**
Do You Even Lift** – Meatheads unite! If a conversation doesn’t involve the words “huge,” “power squat” and “ripped,” why even bother talking, am I right Hulkamaniacs? Can I get a spot over here or what?

Hells Bells – Angus would be proud. Also, the Brewers had Trevor Hoffman for a cup of coffee at the end of his career, and nothing beat watching him walk up to this song. When you tie this fly on, you actually hear the bells no matter where you are, and are in fact required to immediately rock out. It’s spooky.

Roid Rage – I will never forgive those who created the Steroid Era in MLB, so this one gets no points. Just wanted to point that out, cheaters. Thanks for ruining history.

Trophy Wife – I think about 55 percent of the responses were jokes of this ilk. Pick it up, slackers.
**
Steely Dandy** – Are you reelin’ in the fish, strippin’ away the line? The namesake band plays a song that references my alma matter. Major points on that, and this almost won as a result. Also, I appreciate anyone who makes obscure references to ’70s jam bands. We need more of that as a society… life would be better. The earth’s salvation will be recorded on 8-track and only available for listening in a vehicle with hemispherical heads.

Bridge Troll – I can recall an episode of a semi-famous Wisconsin fishing show (get the Frabil!) where I think the host was fishing under a bridge and, in a maniacle laugh, kept saying “I feel like a troll.” Maybe I dreamed it. Who knows? I’m pretty messed up and they keep trying new prescription cocktails. In any event, now I say that whenever I’m under a bridge, which is a lot since my life hasn’t really turned out like I wanted and I actually currently reside under a bridge… so hey, thanks for rubbing salt in that wound, Haverodwilltravel.

Iron Butterfly – It looks like a butterfly and is all metal. I once thought I was going to be a rock god and figured out how to play In-A-Godda-Da-Vida on the guitar. My friends told me I sucked and then made fun of me… a lot. So actually, to heck with this name; it brought back a lot of bad memories. I’m pretty sure po2p70 hangs out with Haverodwilltravel, and they say mean stuff about me and try to figure out how to say po2p70’s handle five times fast.

Winner:
Bucky Bug – I lost our tournament and had to create this pile because the homers in our tooh-na-munt (say that like you’re named Hootie and you live in Georgia) up here in the land of cheese always have the Badgers winning the tournament. Every year. Like clockwork. My kids, who make picks based on which mascot is “cuter” or “is an animal that looks like it was in Frozen” normally do better than the Badgernationphiles up here. So while most years I clean up, this year the Badgers and Frank the Tank beat the heck out of everyone not named Kentucky, and that’s pretty good considering the Badgers don’t even pay their players. Anyhow, in the interests of stepping up and taking my medicine, and recognizing that this year the theories of “I never watch basketball but this college is near me” and “I went to this school so it is automatically the best at everything ever” actually worked, I select this as the winner… grudgingly. Shoot me now.

Mr. Bucky Bug, hit us at editor@anglingtrade.com with your address, and we’ll send you the new Scientific Anglers line.