A First Saltwater Fly-Fishing Trip? Get Your Louisiana Redfish On

I often get asked by trout anglers who want to venture into the saltwater realm for the first time what... 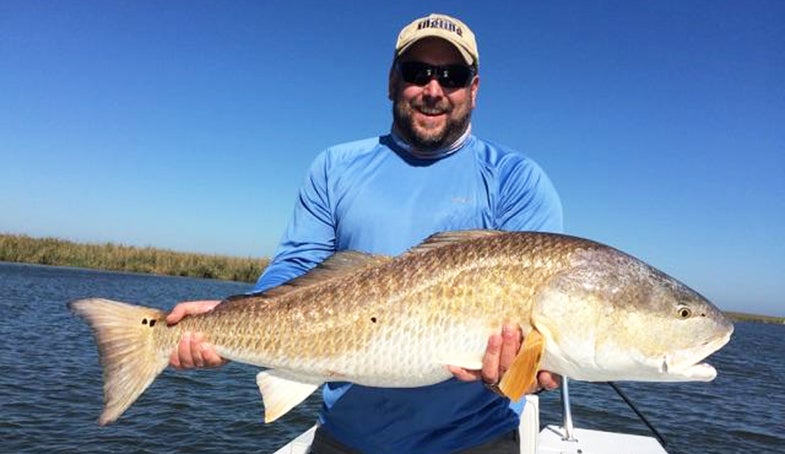 I often get asked by trout anglers who want to venture into the saltwater realm for the first time what would be a good initiation trip? It’s difficult to come up with one, clear answer, because it’s all so interesting. The Florida Keys are a rite of passage and an incredible experience; the Texas flats are rewarding at times; there’s nothing like a striper blitz in the Northeast, and now is the time when that starts happening. Don’t pass up a chance to do any of these outings.

But if you’re sitting in Chicago, for example, feeling the weather turn cool, and jonez-ing for a fall or winter getaway to test your skills in the salt for the first time, Louisiana is the place. There, you don’t have to be able to see fish from 200 yards away or cast a fly 90 feet to have a legitimate shot at catching a redfish, such as the one included above—30 pounds on the Boga. If you see a big red and make a decent cast, odds are, it’s gonna eat. I can’t say that with confidence about permit, tarpon, or sometimes even bonefish.

As with most saltwater angling, Louisiana fishing is fickle. Weather or water might not work in your favor, and it isn’t tropical fishing in January. I’ve been to Louisiana and ended up sitting on the dock, wishing I was out on the water (which, trust me, is better than being out on the water, wishing you were sitting on a dock). And if you’re into food, music, and history, there’s plenty of that down around the mouth of the Mississippi River for your time off the water.

You’ll need a guide, and there are many down there. Surf around and ask some questions, and you’ll land on a good pro. It’s worth the money, because you’ll learn a lot in Louisiana that’ll help you wherever else you fish in saltwater. Plus, even with the flight, the hotel, and hiring a guide, you’re going to spend less than you would flying halfway around the world to some exotic flat (though there’s nothing wrong with that).

I’ll remind you I caught this old swamp donkey last winter with Frank Praznik, fishing out of Venice. Remember? Four casts, four fish, and we nearly topped 100 pounds. That had nothing to do with me—it was all about the great guide and Louisiana’s great natural abundance.