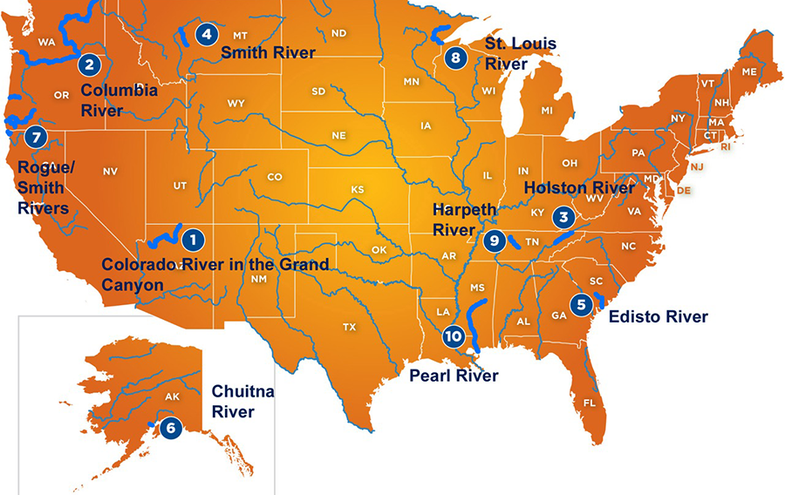 American Rivers released it’s annual list of what it considers the ten most endangered rivers in the United States. Quite a few of them are rivers that I’m sure many of us fish on a regular basis. Why should you care? Because while at risk many of these waterways can be saved and protected for future generations if some of us get up and speak up. Take a look at the organization’s history of success with previous Most Endangered Rivers Report’s from the last 25 years and get involved!

Millions of Americans recognize the Grand Canyon as one of the most iconic landscapes on the planet. But this natural masterpiece of the Colorado River faces a battery of threats. A proposed tram development in the wild heart of the canyon, uranium mining, and a proposed expansion of the town of Tusayan that could deplete vital groundwater supplies all threaten the Grand Canyon’s wild nature and unique experience that belongs to every American. Unless the Department of the Interior acts to stop these threats, one of our nation’s greatest natural treasures will be scarred forever.

The Columbia River is the lifeblood of the Pacific Northwest’s economy and environment. The river’s dams provide more than half the region’s electricity, as well as flood control, but they have also decimated the basin’s salmon and steelhead runs. As the United States and Canada begin renegotiating the Columbia River Treaty this year, the State Department must put the importance of a healthy ecosystem on an equal footing with the benefits of hydropower and flood control. Achieving this balance is critical if we are to pass on a healthy Columbia River and salmon and steelhead runs to future generations. Since the last Treaty was negotiated 60 years ago, this is a once-in-a-lifetime opportunity to restore one of the Northwest’s, and the nation’s, most important rivers.

The Holston River is rich in history and heritage and provides drinking water for tens of thousands of Virginia and Tennessee residents, as well as water for industry, livestock, and recreation. However, the river and its communities are threatened by chemical pollution from an army ammunition plant that has been contaminating water supplies for years. The U.S. Army and its Holston Army Ammunition Plant must immediately stop polluting the Holston River with harmful explosive chemicals to protect the health of the river and communities.

The Smith River is one of the most cherished floating and fishing destinations in Montana. The river is home to a nationally-renowned wild trout fishery, and provides prime habitat for dozens of beloved wildlife species. The river is threatened by a huge proposed copper mine in its headwaters that could seriously degrade water quality with acid mine drainage and toxic heavy metals. The State of Montana should not permit the copper mine unless it can be designed in a way that eliminates any risk to the river’s water quality and habitat.

The Edisto River is one of South Carolina’s most popular rivers for paddling, fishing, and outdoor fun. It’s also the state’s most heavily used river for irrigation, and excessive agricultural water withdrawals are threatening water quality and the water supplies of other users. While the state’s permitting process requires industrial and municipal water users to meet requirements to safeguard river health and clean water, large agribusinesses get a pass. The South Carolina House of Representatives must pass H.3564 this year to end this unfair exemption so that the Edisto—and all of the state’s rivers—can continue to provide sustainable water supplies for all, while supporting river health and recreation.

Alaska’s Chuitna River supports Alaskan Native communities, all five species of wild Pacific salmon, abundant wildlife including moose, bear, and wolf, and excellent opportunities for hunting, fishing, and other recreation. PacRim Coal’s proposal to develop Alaska’s largest open-pit coal strip mine at the Chuitna River’s headwaters poses an unacceptable threat to the economy and communities that rely on clean water and healthy salmon runs. Unless the U.S. Army Corps of Engineers denies the mine’s permit, this pristine wild river and its communities will be irreparably damaged.

The Wild and Scenic Illinois (OR), Rogue (OR) and Smith River (OR and CA) watersheds are known for their pristine waters, healthy salmon runs, globally significant plant biodiversity, and outstanding recreation. But proposed nickel mining in the rivers’ headwaters threatens these unique values. Congress and the Obama Administration must withdraw the headwaters of these special rivers from mining and protect the natural treasures of the Illinois, Rogue, and Smith River watersheds for future generations.

Minnesota’s Arrowhead region is known for its pure and abundant waters, deep forests, expansive wetlands, and recreational opportunities. However, a proposed copper-nickel sulfide mine at the headwaters of the St. Louis River, the region’s main artery, threatens drinking water, wildlife, and treaty-protected hunting, fishing, and gathering rights of the Ojibwe people and all of the region’s citizens. It is critical that state and federal regulators deny permits for the current mine plan which fails to sufficiently protect the St. Louis River and its communities.

The Harpeth River is one of the few free-flowing rivers in Tennessee. It is an oasis for local families, anglers, and boaters in one of the fastest growing regions of the country. But pollution from outdated sewage treatment facilities threatens the river’s clean water, fish and wildlife, and recreation. Unless state officials require state-of-the-art technology to improve sewage treatment, the river will be contaminated with sewage pollution and public health could be compromised.

10) Pearl River (Louisiana, Mississippi)
Threat: New dam
At Risk: Healthy wetlands, fish and wildlife habitat
The Pearl River runs through Central Mississippi and supports vital oyster reefs and marsh habitat in the Mississippi Sound. Coastal wetlands and commercial fisheries depend on the Pearl River’s flows, but the river’s health has been compromised by the Barnett Dam north of Jackson, Mississippi. Now, a new dam is proposed for the Pearl that would cause additional harm to river health, wetlands, and fish and wildlife habitat. The U.S. Army Corps of Engineers must reject this unnecessary and ecologically harmful new dam.