Two weeks ago I put up a photo of Joe with a giant fly-caught goldfish, ahem… koi from our Hook... 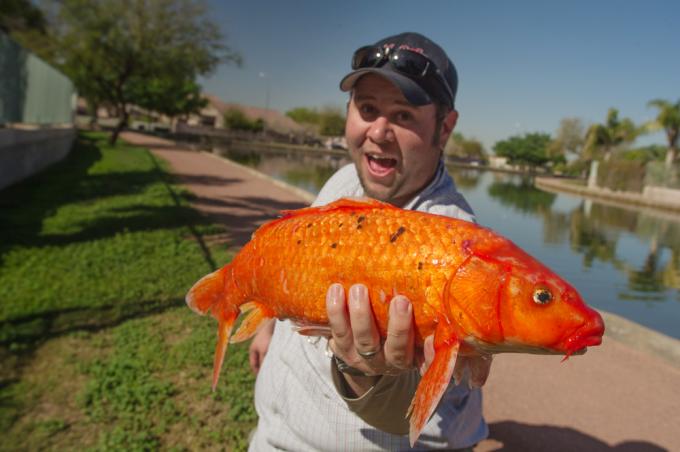 Two weeks ago I put up a photo of Joe with a giant fly-caught goldfish, ahem… koi from our Hook Shot shoot earlier this year. You all ran with the goldfish theme and piled it on Cermele. For the record he’s not so enthused with the image I picked. I think it’s hilarious though…

There were a ton of very funny entries, with my favorites posted below, but I’m gonna have to go with MattM3’s caption. He wrote “At a time like this, Herman’s only comfort was the dim memory of his childhood home on the little kid’s dresser, and the pretty ceramic castle nestled into the bed of pink-and-green pebbles.” MattM3 – shoot me your contact info and I’ll get you out a RIO Gold InTouch 6wt fly line.

from -Bob who wrote:
“Joe, Bring Your Pet to Work” Day was LAST week.”

from sly who wrote:
“The snack that smiles back: goldfish!”

from sgtsly who wrote:
No really, he was in a barrel.

from -Bob who wrote:
“Taa-daahhh! For my next trick, I will juggle a bowling bowl, birthday cake, and a chainsaw…”

from CastMaster25 who wrote:
“Crazy but all it took was one cast with a ping pong ball to win this guy!”

from timj8585 who wrote:
“If you love something, flush it free… If it comes back, it was meant to be!”