This is not a good thing. Well, it’s a wonderful thing, in that I”m preparing for a trip of a … Continued 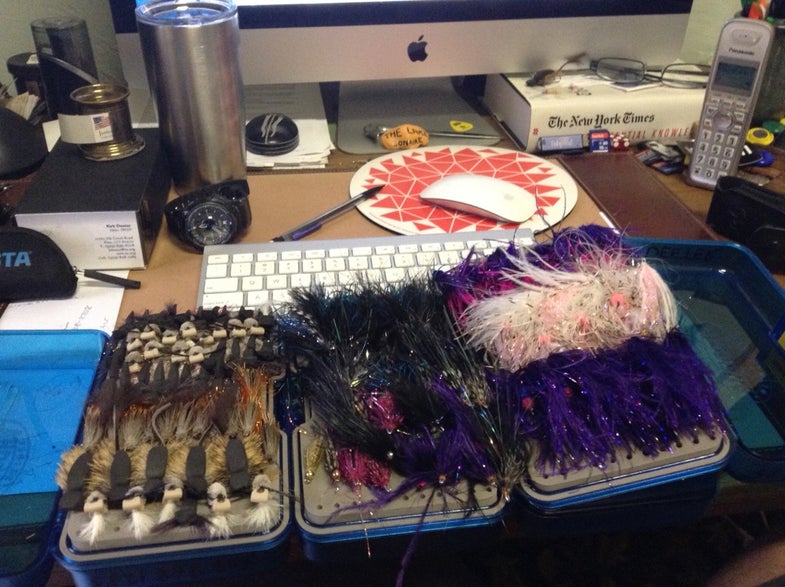 This is not a good thing. Well, it’s a wonderful thing, in that I”m preparing for a trip of a lifetime to go steelhead fishing at BC West on the Dean River in Canada, and I’m loading up an awesome selection of flies from Umpqua. Absolute killer patterns like Fish Tacos, and Morrish Mouse flies… Gurglers and Freight Trains, Steelhead Caddis and even an Ace in the Hole or two. I definitely won’t be bringing a knife to this gunfight.

But it’s a very bad thing in that I have stories to write and magazines to edit. I should be tapping away on that keyboard partially obscured by the glorious globs of feathers, fur, foam and tinsel in the foreground. My watch says its after 6 p.m., and I’m still daydreaming. I have been for a few hours now. When I do close the boxes and focus on the keyboard, it’s to write this blog post… on steelhead.

Many of my friends say they want my job. And it would take a full-on cage match to pry it away from me. But writing and editing is really about long hours of trying to think of intelligent things to say, and scrambling to meet deadlines. Exposing your thoughts to many, and opening yourself up to criticism, every day. It stinks to be on deadline, especially when you’re playing with fly boxes and streamers and skaters.

I’m not complaining. Because the fish still light the pilot in my heart as they did when I was a little boy. And few things get me more stoked than wild steelhead.

There’s nothing like the grab a steelhead makes when you’re swinging flies. Doesn’t matter if it’s Michigan or Oregon, Alaska, or the Olympic Peninsula. Steelhead are the perfect fish. Born in freshwater tributaries, they venture into the salt (or the Great Lakes), then plod their way back to spawn. Some will even do that a couple times or more. Talk about a fish you can cheer for… I am always humbled by steelhead.

I have always found the people who really dig wild steelhead to be the real deal. Some are complete lunatics, of course, but who am I to judge?

And of all the flies you’ll fish, steelhead patterns are the most sexy. They have to be. Because you wouldn’t stand in a river and make 1,000 casts waiting for a single tug if you just had a plain old parachute Adams on your line, would you?

I wonder if these flies are really meant to capture the interest the fish, or tickle the fancy of those who will fish them. I feel hooked. I just wish they wouldn’t do that to me all the time.