Dispatch from Belize… The Grand Slam

I’m headed home after a few wonderful days of fishing at El Pescador in Belize, which included a grand slam—a... 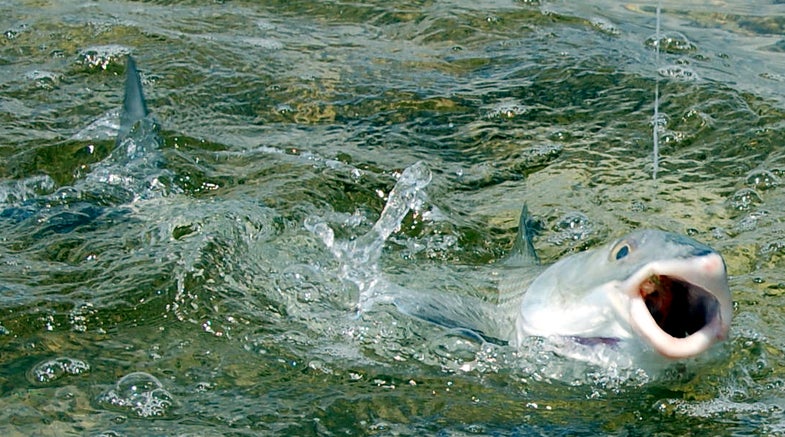 I’m headed home after a few wonderful days of fishing at El Pescador in Belize, which included a grand slam—a permit, bonefish, and tarpon in the same day! It was my young guide Alex Gomez’s first, which made it that much more special.

Truthfully, the grand slam happens 70 percent as a result of the guide’s hard work and ingenuity, 20 percent luck, 5 percent due to a few well-placed casts, and 5 percent having a fishing partner willing to sacrifice some of his or her own casts to let you chase the last fish. So thanks to Alex, and thanks to my good friend Phil Monahan, who heads up Orvis News for being a gracious boat mate.

The quick play-by-play: As we took off from the dock, we told Alex, “We just want to be low-key, and catch a few bonefish. No pressure.” So we headed out on the flat, and sure enough saw some cruising bones, made a few casts, and we were both on the board. Took 20 minutes.

Then, we’re motoring toward another spot when Alex slows the engine, and says, “Now I KNOW we’re really bonefish fishing, but there just happen to be a school of permit cruising down the bank…”

For those, we got out of the boat and waded. And for the longest time, it seemed like the fish were pushing away from us, but they took a turn back, and I fired a cast with a “Squimp” fly. The fly line I was using was the worst fly line (brand new) I have ever fished with in my life, and I swore as I hucked a heavy cast, that I would melt that thing with a blowtorch as soon as I got back to the dock. (It shall remain nameless, but it wasn’t an SA, RIO or AirFlo line…) Anyway, one permit did peel off the school, ate the fly, and bada-bing…

It took me a few minutes to register what had happened, but I eventually turned to Alex and said, “You know what that means?”

And he said, “Don’t say anything at all…”

Next thing I know we’re motoring into darker, shallow water–tarpon water–looking for a little silver king. Alex knew just the right spot… just the right corner of the right flat. A small tarpon indeed poked his head out of the mangroves just enough to give us a target. We made the cast with a yellow streamer, the fish ate, and jumped… and jumped… and jumped. I’m usually pretty low-key about fish falling off of flies, but this one mattered. When we landed it, we were all pretty pumped.

And that was that.

If you want to try for a grand slam, it’s worth visiting El Pescador as this is one of the most diverse and rewarding saltwater fisheries I’ve ever seen. And El Pescador is the most family-friendly, all-around resort where hard-core anglers and snorkelers, scuba divers and others can enjoy equally. If you’re planning a family trip… well, I’ll have more on that later.