Dispatch from New Zealand: 10-Pound Brown and the Mouse Year

First we passed Hope. Then we passed Doubtful. By the time we hit our destination river, I had no idea... 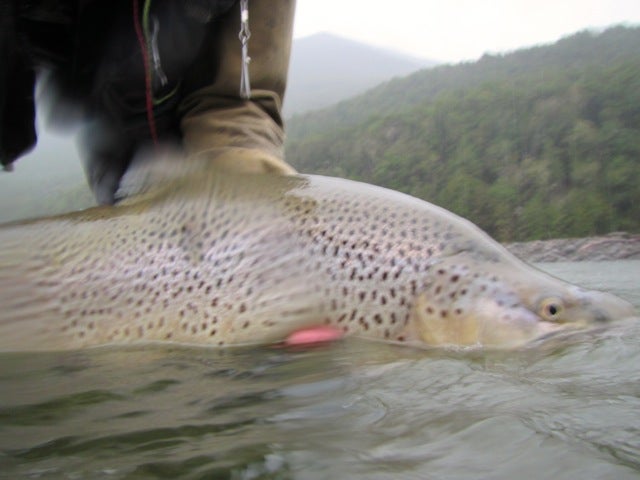 First we passed Hope. Then we passed Doubtful. By the time we hit our destination river, I had no idea what to expect. The report was frightening. John Gemmell, owner of Riverview Lodge, arguably one of the most respected authorities in the world when it comes to sight fishing to trout with flies, described the deluge that happened the day before as such: “We hadn’t had much rain at all since December, and now, the hillsides bubbled under the torrent, like brown porridge pumping down into the river.”

My heart sank. Jeez. Here I had flown 10,000 miles. And Mother Nature was angry. How unlucky could I be? Guide Nic Robertson gave a wink and a smile, and said we would press on in search of clear water… and brown trout that had been eating mice.

I had heard it was a “Mouse Year” before the trip. This is a freakish event that cannot be timed nor planned for. By Gemmell’s recollection, it hasn’t happened in earnest since the early 1990s. When it does, the beech trees in NZ drop seeds in abundance, so much so that rodents proliferate. You can imagine the rest. Mice reproduce so prolifically that some end up falling into rivers, and the trout gorge. But while the optimistic angler from the States conjures visions of rodent “hatches,” and the big NZ trout picking them off the surface all day, it just doesn’t happen that way.

Just like in the States, most of the mouse-eating action really happens at night. Sure, if you want to sling mouse flies at midnight in NZ, you might just freak yourself out. But the real appeal is simply this: Because the trout eat those mice, they plump out to abnormal proportions. The seven-pound browns turn into 10-pound browns. Imagine “The Incredible Hulk.” When the mice happen, the trout turn into monsters. They grow “shoulders” to pack added mass into defined humps. And when the mice are gone, they shrink back to normal… which may still be six or seven pounds.

None of which, mattered for beans, of course, if Nic or I couldn’t see or hook a fish.

But we saw one. And he tied on a muted bead head nymph. No weight. Strike indicator, pure NZ wool, white, the size of a pea. No gink or grease. One cast in the zone (not far, maybe 30 feet) and sure enough, it ate. We landed it. And thus, my first fish of the NZ tour was a legitimate 10-pounder. I apologize for the foggy photo, but it was raining cats and dogs… and frankly, I had a lot on my mind at the time.

The lesson learned was that even in trying conditions, big trout will indeed play ball in semi-clear water. And a good drift trumps all. Had the trout refused that fly, we’d have switched. But it didn’t. And I started this life trip with a double-digit fish (pounds).

This is the area of the South Island you need to focus on if you want to land the biggest brown of your life… mouse year or not. (Riverview Lodge)

Turns out, this was just the warmup.