Dispatch from the Dean: There is No Substitute for Wild Steelhead

I had always heard that pound-for-pound, and inch-for-inch, there is no fish that pulls harder on a fly line than... 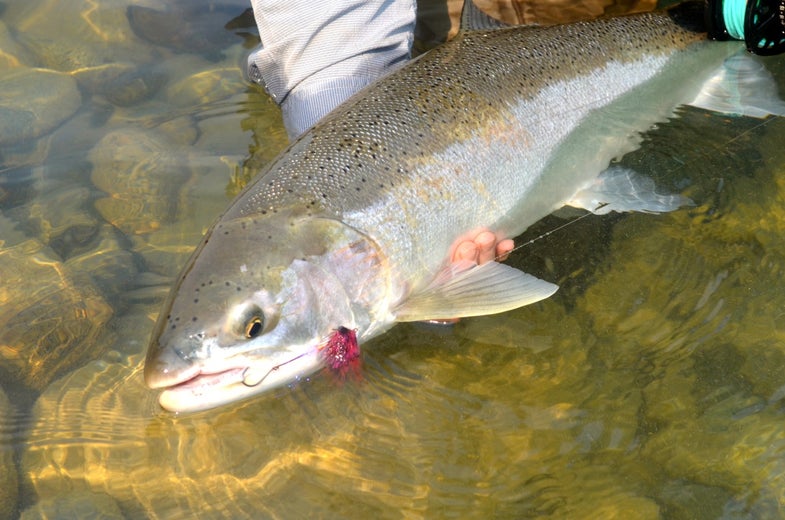 I had always heard that pound-for-pound, and inch-for-inch, there is no fish that pulls harder on a fly line than a Dean River (British Columbia) steelhead. Having now finally had the chance to fulfill a lifelong ambition and fish the Dean myself, and even pull on a few of those fish (or maybe they’re pulling me around?), I’m not going to argue. I haven’t caught every species I want in this world, but I have caught quite a few, including blue marlin, tarpon, roosterfish, arapaimas, mako sharks, and yellowfin tuna… and I have also caught plenty of steelhead from Alaska to Oregon, and in the Great Lakes as well. All those fish are absolutely wonderful. But the Dean fish are indeed special.

Why? It boils down to many thousands of years of breeding and instinct. You see, for a Dean steelhead to return to its natal waters to spawn, it must run up a canyon where the water rips and cascades through a nozzle of boulders and waterfalls (the photo below doesn’t do justice to the power of the current, and I am here in the “low water” season, after most of the steelhead have run this gauntlet). Just like certain dogs are bred to hunt, and some thoroughbred horses are meant to race, Dean steelhead are bred (naturally) to have the jets to power through this wash. And when you hook one, even in a calm pool, they can turn those jets on. If they don’t have the jets, they don’t survive and reproduce. It’s a natural selection thing, plain and simple.

All of which has instilled in me a greater appreciation of wild fish and wild places. I learned my steelhead fishing in Michigan, where steelhead were introduced decades ago. I had always held a bit of a grudge against the Pacific Northwest “purists” who claim Great Lakes steelhead aren’t “really” steelhead because they are not anadromous, meaning they run from freshwater to the salt and back again. I thought that was a bunch of bull. A Pere Marquette River (Michigan) steelhead can wrap you around a stump and take you to school with great effect. But, alas, Michigan steelhead aren’t Dean fish. And they never will be. Even if they survive and evolve for 1,000 years, they won’t be the same. Because they’ll never have to run this rapid. 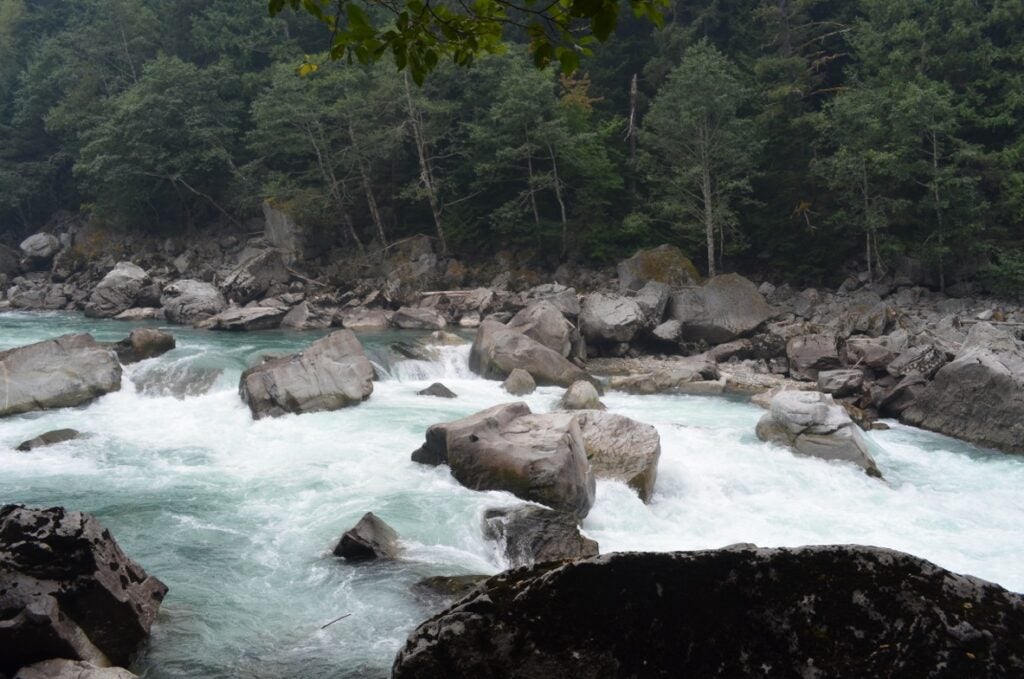 That’s not to suggest that one type of steelhead is necessarily better than the other. I think it’s time to lose this largely juvenile, “my steelhead is better than your steelhead” patter, because, in the end, steelhead anglers of all walks should band together and keep their eyes on the prize. And whether you are from the Midwest or the Pacific Northwest, the greatest prize consists of the wild strains.

Transplanted, even hatchery, steelhead in places like Ohio and New York? Perfectly fine, even wonderful, because they turn legions of anglers onto a species and a sport, and those anglers can be crusaders for steelhead throughout North America.

The devil in the details, it is now clear to me. It’s when we start talking about hatchery fish as an easy fix. Build a mine here… if there’s a problem, we’ll just restock from hatcheries. Build a pipeline there, and we can accept the risk by knowing that we can pump fish into the system. If we want more people catching fish in rivers that are already goofed up, we just dump more hatchery fish in the water. And that’s the dumbest thing we can do. Fix the water, not the fish.

The point in all of this is quite simple: Just a few tugs on the Dean have reinforced in my mind that it’s worth hanging onto the unique instinctive characteristics of wild steelhead — any wild fish, for that matter — wherever we can, whenever we can, and whatever the cost.

Once it’s gone, it’s gone. And, those thousands of years of instinct can’t be taught, or manufactured, and certainly not replaced, no matter what people might try. If you are fortunate enough to someday hook a Dean River steelhead, you’ll know exactly what I mean in about two seconds. If you already have, I’m preaching to the choir.