Does Fly Fishing At Night Improve Your Casting and Mending?

Last week a good friend and I put on a fairly placid section of the Colorado River at 7 p.m.... 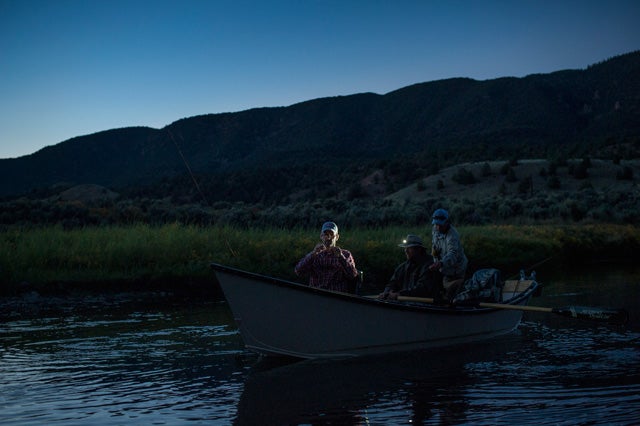 Last week a good friend and I put on a fairly placid section of the Colorado River at 7 p.m. with my new Boulder Boat Works dory. We floated until almost 1 a.m. It was a section I know like the back of my hand and barely has any real obstacles to maneuver around. That said, we did bring some very powerful headlamps and flashlights as back-up. The objective was to throw ungodly large streamers and mice patterns for anything that might eat them. Namely very large brown trout.

Unfortunately for us the night turned much much colder than the weather had predicted or that we had anticipated, and basically shut the fishing down. None the less, we cast and cast and cast again. For hours and hours, with really nothing to show for it.

We lost some bugs and dealt with a few tangles, but the next morning waiting for coffee to brew we both came to the conclusion that casting all night in the pitch black actually helped our skill set out and maybe we should do it more often. It sounds strange, but you learn to “feel” takes, the bank, bushes and current lines much better than if you were simply fishing during the day. While you’re definitely not as accurate, I do think you end up losing fewer bugs after gaining that sense of touch that you can only acquire at night. It’s tough to describe, but I think we both felt at a certain point that we knew exactly how far to cast even thought we could barely see the bank. When to mend, even though we couldn’t see eddy lines. We just felt a lot more “in-tune” with our lines and rods.

Anyone else ever have this kind of experience fishing at night, or am I off my rocker?