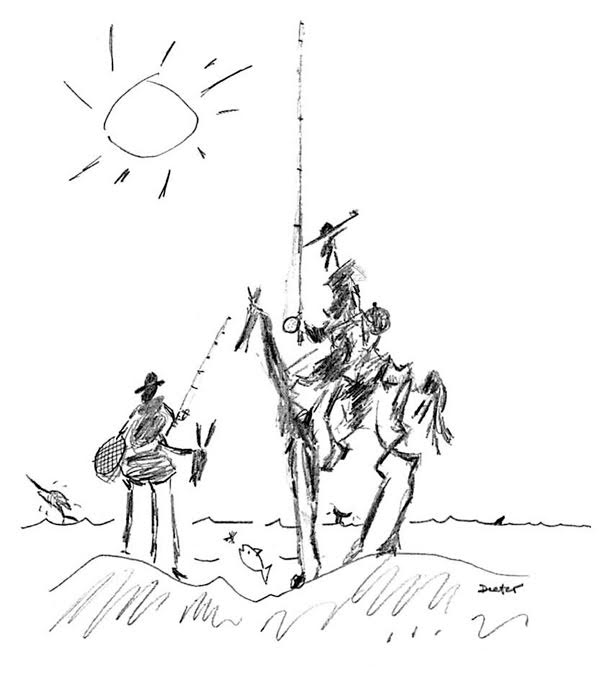 The literary genius who best summarized Fish Quixote (The Ingenious Gentleman Angler of Baldwin, Michigan) in one sentence is…

Haunted By Waters, who eloquently penned: Fish Quixote and Coho Panza bring chivalry to the Manistee as they wander the rivers and streams, helping lonely fly fisherman by wading in 10 feet down stream, improving river flow by removing fallen trees, logs, and other barriers, and false casting 3,300 times while naked to release Smeltcinea from the trance of an evil spell that only allows her to nymph fish.

You had me at “Coho Panza,” but “Smeltcinea” sealed the deal. A good grasp of Michigan and the original work didn’t hurt you either. And I so pity anglers who can only nymph fish.

Haunted, if you hit me at editor@anglingtrade.com, I will put you directly in touch with the good people at Cabela’s, who will send you your rod and reel.

This was clearly one of the best contests we’ve ever done, with some really thoughtful, witty responses. To wit, I must also offer props to NovaScotia, who wrote: “This is the harrowing tale of two Royal Canadian Mounted Police who ride through the Arctic on Mooseback armed only with two fishing rods and a waffle iron in search of the worlds largest brown trouts, errr, I mean in search of the worlds most dangerous criminals.” A waffle iron? Brilliant.

And to Frank D… “To Stream the Impossible Stream.” But of course. Outstanding.

And Cbass123, I like the idea of “tilting” at lighthouses.

Good on all of you. We’ll do it again soon!