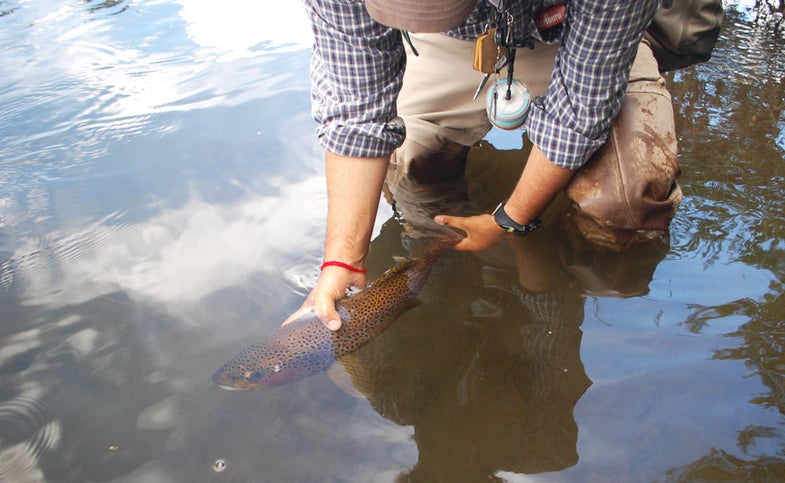 I love the fall colors. And I’m not talking about trees.

So here are five quick tips to help you catch a big brown this fall.

1. Don’t be a fair weather angler. When the rain, sleet, or snow flies, and others head indoors, you should be headed toward the river on your brown trout quest. I like the flat light of a gray sky best, with a light breeze creating chop on the surface.

2. Big bugs catch big fish. It’s streamer time, folks. If you aren’t throwing patterns that are at least two inches long, your odds of catching a fish at least 20 inches long are much less. Granted, you won’t catch all the dinky fish, so your total might not be that much. But I’ll take one bruiser over 20 little fish, any day.

3. Think Halloween colors. Every streamer I fish now has at least hints of orange, or yellow, or both. Of course, water clarity dictates whether you generally go light or dark. Clearer water should lead you toward whites and creams, while slightly tinted water should point you toward blacks and browns.

4. Stick and move. Work from upstream-down, and pound those banks. Most of the big browns are going to be within five feet of the bank, usually in a deep depression with natural cover, like deadfall or rocks. Don’t pound a run for an hour. They’re either going to attack the fly, or not, and your odds diminish with every cast you make.

5. Don’t be afraid to use sink tips. I’d rather use a lighter fly on a sinking tip fly line than adding weight to my leader or the fly itself. I’m after water displacement, bubbles, and action with the bug, so materials like deer hair are often best.

There are plenty of other tips. Watch the water before you cast. Make every cast matter. Wade as quietly as you can. And on and on. But focus on those five things, and your brown trout bounty will increase exponentially.