I am a huge believer in the theory that variation in fly patterns leads to more hook-ups, especially where waters... 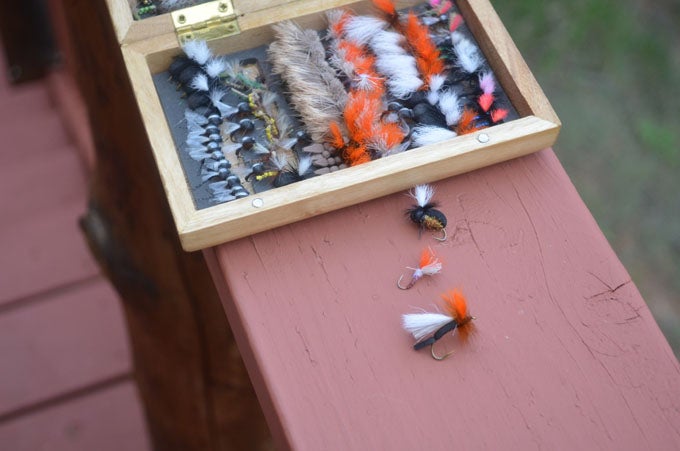 I am a huge believer in the theory that variation in fly patterns leads to more hook-ups, especially where waters are busy and pressured trout are finicky. There’s absolutely nothing wrong with throwing classic, standard terrestrials and mayfly patterns this time of the year, but I have found that being just a touch outside the norm is usually a very good play (read my piece on fishing the trico hatch and you’ll get my drift). How many “Chernobyl Ants” do you think the trout in your river have seen in the last week, honestly?

Can you improvise your own patterns? Of course you can — and you should. There are oodles of innovative fly tiers at shops throughout America spinning up new creations every day. But sometimes it’s the flies from halfway around the world that seem to do the trick. I started fishing a bunch of flies I bought from Stu Tripney, who is based in Athol, New Zealand. His flies, in one word — wow. I took a handful of his creations to the home river in Colorado the other night and just hammered fish with them. I can’t help but think that part of the equation was that the trout hadn’t yet seen anything quite like the flies I was putting on the water.

I met Tripney last year, and learned that he’s off in his own league, as far as fishing insight goes. Originally from Scotland, he has guided in Africa and fished the best saltwater flats all around the world. Now he’s set up shop in a remote part of New Zealand’s South Island that revolves around epic sight fishing for massive trout. And when his trout season is over, he jets to the U.S. to tour around and chase carp — on the fly.

Trust me, you’re going to be hearing more chatter about Tripney’s special NZ bugs and how they can be effectively applied to American waters. Here’s why:

Materials
Good hooks and great fly construction really matter. Like Tripney, I’ve always wondered why someone would spend more than a grand on a fly rod, reel, line, and waders, only to toss a 99-cent piece of junk at a 23-inch brown that’s porpoising on pale morning duns. So how many fish should a fly catch to make it worth buying? I’ll take a 10-fish fly that costs a few bucks over a bargain special that unravels after the first 10-inch rainbow any day. And let’s be honest: A majority of the flies you buy at fly shops are coming from halfway around the world anyway. Tripney’s flies last. Granted, I’ve only been fishing them a few nights, but I have yet to burn through a single one and have to throw it away.

Easy on Anglers, Hard on Trout
Tripney designed his bugs so they “pop” and are easy to see from the top side (where anglers watch them), yet still appear buggy and enticing from below the surface (where fish watch them). They’re better than most other flies I’ve fished with before. I’m going to put on the scuba mask and check that out further.

Selection
The great thing about Stu’s Flies is you can shop by species (brown trout, brook trout, etc.) or situation (lakes, rivers, etc.). So it’s pretty easy to dial in on some options that will work in your own home waters, even in the U.S. Take a good hard look at the “Cowboy” patterns, the “Mayfly Cripples,” and the “Wee Fairy,” especially now, during PMD season. As for prices and logistics, you’ll have to do your own math, but I find the value surprisingly good, and I had my order from New Zealand within two weeks.

I bought dry flies. He does wind up pretty interesting nymph patterns, some of which involve UV-attractor colors. But I’m into dry-fly fishing this time of year, and if you really want to play bobber-ball now, you might as well put a production fly on. The real pattern-specific game is happening on the surface.

I’m not saying that you should shun your local fly shop, by any means, or that you shouldn’t tie your own flies. I buy locally and tie as much as I can. But variety is the spice of life, so you might want to consider buying some of Tripney’s flies and tucking a few dozen in a corner of your favorite fly box. I now call that part of my fly arsenal “the nuclear option.”