Last week’s caption contest I’ve heard in a while. Much to the chagrin of my wife, who I made sit... 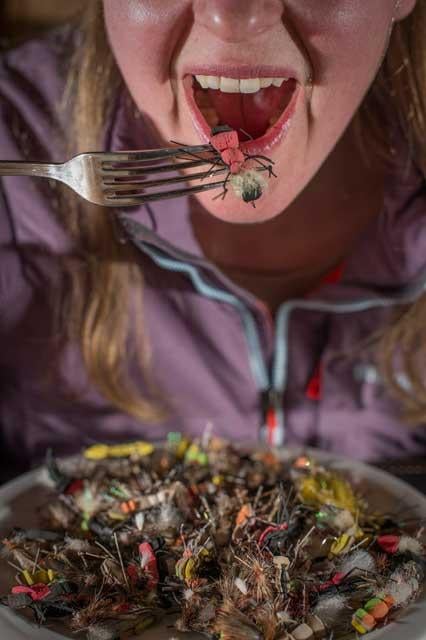 Last week’s caption contest I’ve heard in a while. Much to the chagrin of my wife, who I made sit for the image…

There were so many good captions, the best of which I’ve pasted below. After much deliberation though I have to give the grab bag of goodies, containing a pair of Hillsound’s FreeSteps6 wading cleats, super.natural energy LS base layer shirt, some new SPY fishing shades plus handful of indicators and other terminal tackle to SMC1986 who wrote, “And that kids, is how I hooked, err I mean met, your mother.” SMC1986 shoot me an email to tim@anglingtrade.com and I’ll send out your goodies.

Here are a pile of my other favorites.

From Micropterus24 who wrote: “Ugh, I hate all the artificial ingredients they use these days!”

From UnclePezz who wrote: “This dish needs some Romano Cheese…”

From Nympho who wrote: “Georgie spider catches flies.
But doesn’t eat the little guys.
Instead he cooks them up in insect pies.
He doesn’t use the legs or eyes, or any artificial dyes.
At last year’s fair they won first prize,
So if you’re hungry, stop on by and give Georgie’s fresh fly pie a try”.
Credit and reference to: Polka Bats and Octopus Slacks, 14 stories by Calef Brown (a children’s book).

From Cbass123 who wrote: “She ate the first one on a dare, but after that, she was hooked!”

From Stephanie Davis who wrote: “Crap, there’s some food on my fly.”

From mooseking22 who wrote: “This picture is bugging me. :)”

From mnobles23 who wrote: “Silly rabbit, ticks are for kids.”

From gambit the dog who wrote: “Barbless don’t quite have the same zing but have an easier exit.”

From Just Fish’n who wrote: “Man this dish is really dry! You think its because of the flies?”

From sg72 who wrote: “How many can she get down before they all hook up?”

From sg72 who wrote: “She wasn’t sure she wanted to do this, but once she tried it, she was hooked!”

From Hallz92 who wrote: “Excuse me… Waiter! There seems to be a fly in my dish!”

From CastMaster25 who wrote: “I don’t know why she swallowed the fly, perhaps she’ll …”