The caption contest from December 18th had a pile of goodies up for grabs, including ARC99 8wt Saltwater fly line,... 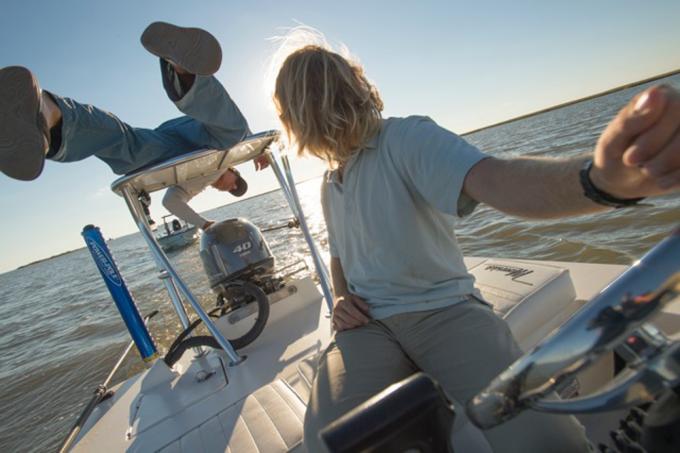 The caption contest from December 18th had a pile of goodies up for grabs, including ARC99 8wt Saltwater fly line, Corqs strike indicators, a six-spool tippet boss, an Avex insulated pint glass, Buff Water 2 Gloves, and a couple of meals from the world’s best-tasting freeze-dried company, Backpackers Pantry.

After much deliberation I have to give the prize-filled bag to -Bob, who killed me with this caption: “Give a man a fish…he eats for a day. Teach a man to fish…he pounds tequila shooters and does weird things on your poling platform.” He also gets the runner up with this one: “Even the on-board referee couldn’t believe Todd’s latest “quarters” shot: back turned, over the shoulder, off the boathook, into the outdrive exhaust port…nothing but net.”

-Bob, shoot me an email at tim@anglingtrade.com and I’ll make sure to get your goodie bag sent out.

There were quite a few others that had me in stitches too. They are as follows…

from CABdriver who wrote, “Deeter, a former Olympic gymnast, never missed an opportunity to show off his bronze-medal-winning pommel-horse routine.”

from smccardell who wrote, “And that, my friends, is why Deeter will not be invited by Romano and Cermele to next years Ditch Pickle Classic.”

from asrenstromwho wrote, “just gotta write one more “zero” on the motor, then we’ll really be cruising!”

from Cbass123who wrote, “Alright, I’ve got the flux capacitor fixed. Now let’s get this baby up to 88 mph.”

from steelmaster who wrote, “Don’t “choke.”

from coleman_hays who wrote, “Pull faster! They’re gainin’ on us!”

from Clifford Bonesteel who wrote, “What do you mean, it’s not your turn to manually operate the motor now.”