It’s the best roll-casting 4-weight I can remember, and one of the most accurate dry-fly rods I’ve played around with... 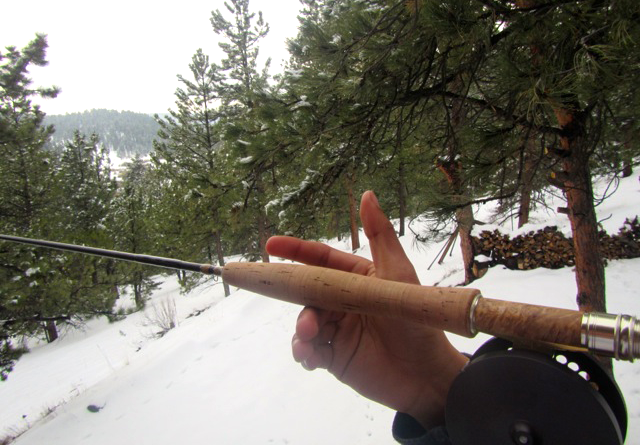 It’s the best roll-casting 4-weight I can remember, and one of the most accurate dry-fly rods I’ve played around with in a long time. I wish I would have had it when I was in New Zealand.

There. If you’re in a hurry, that’s probably all you need to know.

But this is such a curious case, these “Drifter” fly rods, and there are so many layers to the “backstory,” that you just might want to read on.

I had every reason to be skeptical when Michael Kopp, founder of Drifter Fly Fishing first contacted me (and Romano) to say he had a rod series that he thought could compete with the big boys. And by that, I mean the high-end, performance realm. Drifter rods cost $785, right in the same neighborhood as the Sage ONE, or the Orvis Helios 2, and the Scott Radian—all of which I love.

“Wow,” I thought. “You’d better not be bears hunting with a stick…”

Truth is, I see dozens of new fly rod pitches in a given year. Most of them play the price point game: “I’m going to develop a really great taper and use decent raw materials, make the rod in Korea or China, and sell it to Americans for a fraction of the cost.” Not a new idea by any means. While it sounds great, the truth is 90 percent of those rods are absolute crap when you look at the finished product. The guides are screwed up, or they don’t jibe with the natural spline of the rod… the wraps are inconsistent and blemished… the action is sloppy, they break, whatever.

That’s not to say that import rods are all bad by any means. And those of you who have read Fly Talk for the past several years know that I am not the type to say you need to spend several hundred dollars for a perfectly functional, fishable rod. There are some imports I really like (and I’ve written about them). But in my humble opinion, there are only really three or four companies that can pull off producing legitimate “quality” rods in the import scenario, otherwise you get what you pay for.

In fairness, I also think there’s a lot of crap being peddled at the high-end price range. There are now many rods being sold on reputation and marketing alone, or on the “too cool for school” factor, but they can’t pass the scratch-n-sniff test with any serious angler who has caught more than, say, 5,000 trout in their lifetime.

Where Kopp got me, and why I decided to spend a few hours fishing with him today, in the snow (yes, the photo was taken today), and why I’m bringing this rod with me as I drag [the new dory](https://www.fieldandstream.com/blogs/flytalk/drift-boat-name-selected-the-float-trip-winner-is/ up) to Montana next week, is that he keyed in on the “moderate action” niche.

Drifter doesn’t want to make fast-action rods. It isn’t about big casts, and wind-busting, and power. Drifter rods are about smooth casting and accuracy. They’re trout rods. Right now, the company makes “Covert” 2-weights through 5-weights. A 5-weight is the max. All the attention and design effort is on the trout realm.

Personally, I think that’s where it should be. The fly-fishing world spins on an axis of trout. Fifty percent of Sage’s total rod sales (roughly) are 9-foot, 5-weights. Yes, we all want to nip away at the edges, and grow the sport, so we talk about carp, and bass, and the whole saltwater scene. But fly fishing revolves around trout. Period. Reels are a different story. Test reels in the salt with creatures that pull really hard, and then bring them back to the rivers. But a great trout rod should be designed to cast trout flies on trout waters. That’s what matters to me.

So here’s what I have to say in detail about the Drifter rod.

It’s classy looking. Not a stunner on aesthetics, in that it doesn’t sport a fancy paint job. But it looks like a working tool—unpainted, but sanded (in the old Loomis GLX tradition) with nice wraps, snake guides, and a Box Elder burl wood reel seat. It looks like a workingman’s fly rod.

It’s also an “intuitive” rod, and those of you who have read me before, know that’s a compliment. It’s the kind of rod that minimizes the thought process as you factor where you want to cast, and where you actually drop the fly. You think it… and if you have a half-decent casting stroke, the fly goes there every time. Boom, boom, boom. It’s almost a self-loading rod, but it helps (as usual) if you pick the line up with the tip pointed at or near the water surface. You need to generate line speed to make this one go, but with the proper lineup mechanics, the rod grabs and transposes the energy in the right way. You don’t fight hiccups with this rod. Follow the basics, and it’ll do what you ask it to do, consistently.

I love the grip on this Drifter rod. The cork comes from Portugal and is shaped to form in the Rockies. I don’t have massive hands, but I have average man hands, and one of my pet peeves recently is that the grips on many fly rods are way too slender. I personally think the hand-to-grip connection is a very important factor in casting, in general, and most fly rods—even some top-end models—have grips that are way too small now. I don’t know if the rod manufacturers want to appeal to the female demographic, or if they’re just being cheap with the grips, but they’re too small for men like me. The Drifter grip is right.

In that regard, you can feel the cast—and you can feel the fight—right down to the grip. In my mind, that’s a good thing. If I can’t actually feel the cast in my casting hand as I toss the line, the rod isn’t right. I want to feel the rod loading in my hand, and I don’t want to have to guess. That’s not too much to ask from an intermediate to advanced caster. Many of the current fast-action rods are intentionally designed to cover up the flaws of a caster who cannot genuinely feel the rod load and shape their cast accordingly. That’s fine, and maybe, even, that’s a good thing for people who just want to punch line. But if you are a legitimate caster, you want to feel the line load. If you really know how to handle a fly rod, you should demand nothing less.

It’s a straight-shooter. The flies drop in line with the rod tip, where I aim the rod tip, every time. I took it out to about 70 feet, and it still tracked pure. Granted, 70-foot casts are wasted “hero” casts in most trout scenarios, but in the 30-40-foot range, it was butter smooth, and right on line. To me, you want to be looking right over your thumbnail on the top of the grip, and see that fly dropping in the water, right there, right off the tip of the rod. The Drifter did that as consistently as many of the best rod models I’ve thrown.

When I caught fish, the “play” factor was a “9” on a 1-10 scale, in that I felt it to be really responsive and sensitive. You’ll notice that the blank diameter of this rod is actually noticeably slimmer—kind of like the Sage ONE—so it’s a little more tender than what you’re used to, especially in the lighter line weights.

I didn’t fish in heavy wind, and I didn’t throw streamers. I threw dries, and some nymphs. I liked what I experienced, and I can positively anticipate the other scenarios, but I can’t tell you, yet, what I think about this rod in those situations.

So where will the critics poke holes?

Well, Drifter doesn’t roll its own blanks. The company doesn’t have the proprietary, generation-next graphite and resin patents. The blanks are imported… not from Asia, mind you, but from another part of the world that’s recently grown very near and dear to me in terms of trout-fishing prowess. They actually cost more than US-made blanks. Everything is finished and QC happens in the Rocky Mountains.

It’s an upstart company, and we don’t know what the future holds, though Drifter does offer a lifetime guarantee with regard to breakage. On top of that, the company offers a satisfaction guarantee… take the rod out and fish it, and if you don’t like it for whatever reason, send it back, and you get your money back. No questions. I haven’t seen that before.

When you add everything up, I’d take a chance. I’ll buy one of these rods.

And I think it’s good for the sport, because I think it will get some of the rod manufacturers who have been making a living off of paint jobs, and cool videos, and whatever else, to actually make performance rods that work better (not talk better). I like that the little man has made something that should make the big boys pay attention.

A Drifter requires a leap of faith, to be sure, but I think there’s substance here. And I think it’s good for the market. I hope some fly shops catch on.