(Last) Dispatch from the Dean: A Bet Paid in Full

This is what happens when a guy from Denver, who happens to write the “Fly Talk” blog, runs his mouth... 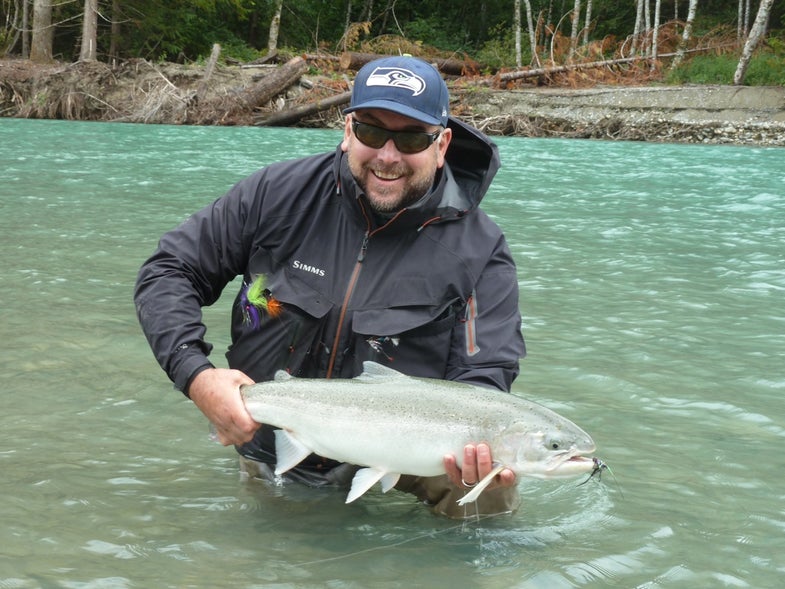 This is what happens when a guy from Denver, who happens to write the “Fly Talk” blog, runs his mouth the week before the Super Bowl to his buddy, Andrew Bennett, who happens to live in Seattle, and also runs a fly-fishing blog.

He who loses the Super Bowl bet must post a photograph of himself wearing a cap honoring the victorious team, as he holds a wild steelhead caught on the trip to the Dean River that they’ve planned together since before the Broncos and Seahawks teed it up in February.

Thus, I am officially choking down the humble pie, for all the world to see. Thank you, Richard Sherman, Russell Wilson, et. al. On that day, I was officially the 12th man, in waders.

Then again, I have to say, if the “payout” revolves around going to the Dean and catching a wild steelhead to wear that cap… it could be much, much worse. I think I kinda won, either way.

Double or nothing?! I’m game. I’m still believing in the Broncs, and I’ll take all challenges.

But it won’t go to the college ranks. Buckhunter, I love ya man, but no matter how much you might relish the thought, you’ll never, ever, ever see a red “O” on my noggin, no matter what.