So I’m on my way to go fish for steelhead on the Dean River in British Columbia—the trip of a... 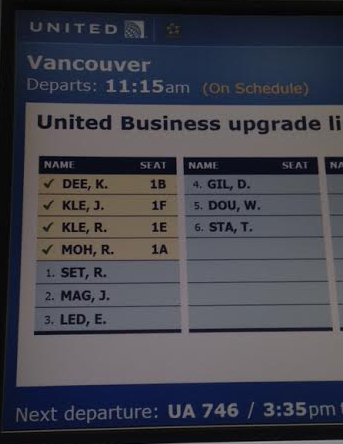 So I’m on my way to go fish for steelhead on the Dean River in British Columbia—the trip of a lifetime—and I show up at the gate for my flight to Vancouver, and I see this.

I was upgraded to first class. But instead of thinking, “Wow, that’s really cool (trust me, I’ve flown enough miles to earn the occasional perk), I’m thinking, “Uh-oh, this isn’t good.”

Because I am a pathetically superstitious angler. I think you need to feed the fishing gods with bad luck, before any good luck fishing-wise happens. I’d like to think that the fishing gods are paving the way for me to experience amazing things now. But I’ve found that I catch the most fish when all karma is seemingly working the other way.

Examples… storm blows in off Hatteras and kicks up the seas to the point that my camera crew and everyone else barf so much that they head for home. The next day, I go out and catch two blue marlins in one day.

I fish the Telluride One-Fly many years ago and get the stomach flu so bad the day before that I spend most of the event curled in the fetal position on a gravel bar. The next year, I win it.

I twist my knee stepping over a rock while on a trip in Iceland. Can hardly walk. Next day… boom… 26-inch brown trout on a dry fly.

Lose my luggage en route to Russia, and go through Customs in Murmansk with only my carry-on backpack, which, in addition to my computer and camera, now only has just six pairs of underwear and a bottle of Scotch I bought at Duty-Free in Helsinki. I proceed to catch 63 Atlantic salmon on flies that week in gear and clothes I borrow from guides.

I am always superstitious. Won’t stand for a hat on a bed. Never walk under ladders.

Joe Cermele will attest to the fact that sometimes, when the fishing is slow, and the chips are down, I will even revert to doing the “Chicken Dance” in the boat, just to change the mojo. Sometimes that works; sometimes it does not.

How about you? Are you a superstitious angler?

Granted, we like to think that fishing is all about skill, but let’s be honest. It’s also a lot about luck. I think I need your juju to make this one work.