Big kudos and thanks go out to my friend Adam Marton and the Fieldworkers Club for doing some important tarpon... 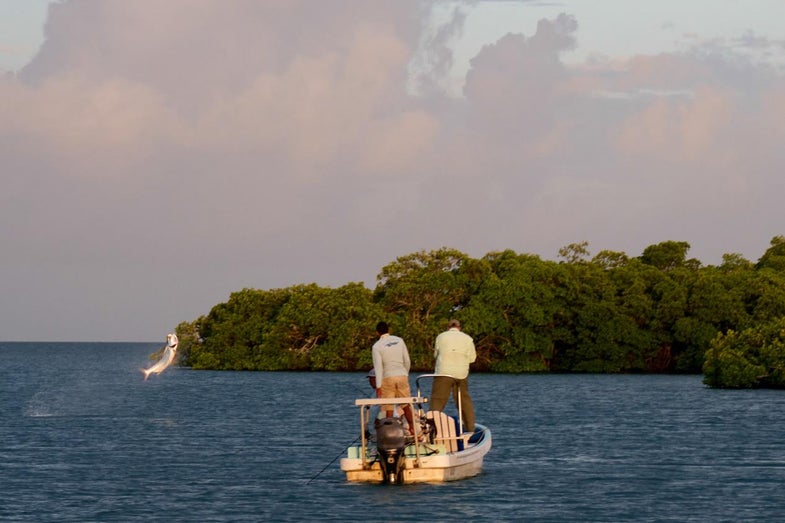 Big kudos and thanks go out to my friend Adam Marton and the Fieldworkers Club for doing some important tarpon tagging work in Belize August 15-22. Marton and Andy Mill led a team of 17 anglers from all over the United States who signed up for the (pretty sweet, but no less challenging) job of catching tarpon in Belize (El Pescador Resort was host site) and tagging them. This will aid the Bonefish and Tarpon Research Center at the University of Miami study these fish, so we can understand their migratory patterns better.

From the Fieldworkers Club report:

“These dates were chosen a year ahead of time to coincide with suspected peak migratory tarpon population numbers, optimal moon and tide phases, stable weather patterns and angler availability. The expedition team hooked or landed a total of 44 tarpon ranging in size from approximately 15-150 pounds,” expedition Leader Adam Marton said. “That is an important number as it represents the overall number of opportunities for tagging. It’s also important to note that 44 tarpon is more than double the combined tagging opportunities of the 2013 and 2014 expeditions. Of the 44 fish hooked, more than a dozen not landed were estimated to be of taggable size (80-pounds or over). The increase of these numbers can be attributed to many factors, including: greater numbers of tarpon, increased angler skill level, favorable weather conditions, and concentrated fishing in the most populated tarpon habitats.”

In the end, three satellite tags were successfully deployed on adult tarpon in Northern Belize.

Tarpon are amazing creatures indeed. They can live as long as 80 years, and we’re still trying to figure out how they spawn, how far they range, and why they move when they do. Thus, when some neanderthal spears a tarpon off the Louisiana coast, he’s really impacting fisheries many miles away. Understanding them better, will help us keep populations healthy. And, it will keep one of the most exciting brands of fly fishing to be had anywhere on the planet kicking for years to come.