Video: Fly Fishing for Rainbow Bass in the Jungles of Nicaragua

I didn’t even know there was something out there named rainbow bass… Apparently the boys over at GEOBASS didn’t either... 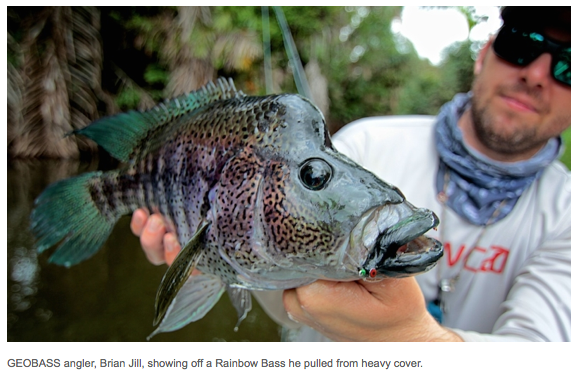 I didn’t even know there was something out there named rainbow bass… Apparently the boys over at GEOBASS didn’t either until a little while ago.

According to their website, GEOBASS is “a group of trout bums that go after the most popular game fish on the planet. The series follows four expedition anglers as they trek through the remote regions of Earth, chasing down various species of bass. From Peacock Bass in the Amazon River basin to the giant Black Bass of Papua New Guinea, they use extreme measures to find their fish, and unconventional ways to catch them.”

The most recent episode takes them deep into the Nicaraguan jungle to an incredibly remote lagoon looking for rainbow bass. Along the way they eat iguanas, catch a ton of species that are probably new to most of you (and me), and finally score what has to be one of the coolest looking bass I’ve ever seen. Enjoy.