What’s Your Most Memorable Fishing Assist?

All this week I’ve been on a photo shoot here in Colorado with the fellas from Scientific Anglers and we’ve... 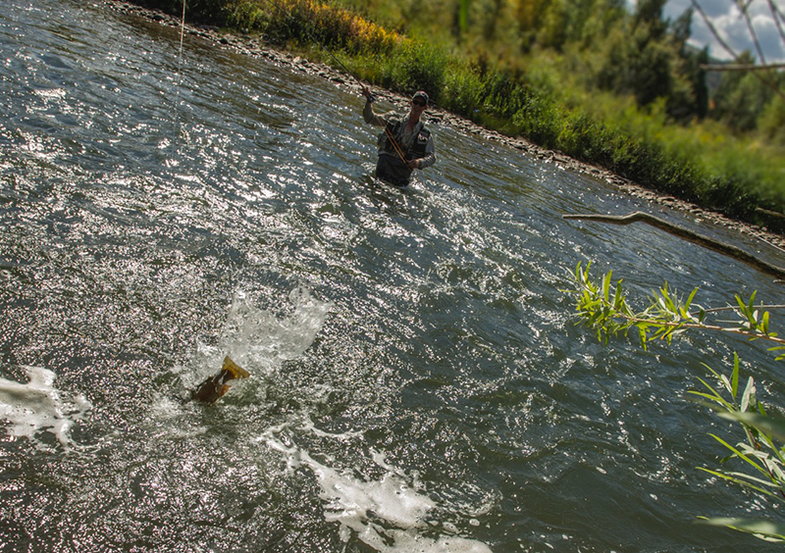 All this week I’ve been on a photo shoot here in Colorado with the fellas from Scientific Anglers and we’ve been giving their new lines a workout.

A couple of days ago while fishing the Eagle River, angler Willie Tiefel and I took quite a bit of time to get set up for what I hoped would be an amazing shot. We had found a couple of fish on the far bank sipping tiny dries in thick foam. Luckily for me the foam also had some very thick willows right on top of it with a small opening. I waded back across the river, hiked down to the spot, belly crawled inside the willow thicket and got myself within two feet of the sipping fish. Problem was, despite Willie’s skills, he simply could not get a perfect drift. After a few minutes of trying, Willie hooked his spinner on a tree branch about two inches from my knee. When I pulled it out, instead of just throwing it back into the current, I dropped it straight down to where I had last seen the fish eat. The all hell broke loose. The fish ate, Willie set the hook, and I had about .5 seconds to grab my camera and rip off a couple of shoots. Willie finally ended up landing the trout—an amazing 18-inch cutbow—about 2 minutes later. During the whole scene, the rest of the crew was whooping and hollering and simply could not believe how our luck and team work played out. I don’t think that would happen so perfectly again in a million years. It was probably one of the coolest ways I’ve ever “caught” a fish and was something I’ll never forget.