Why I’ll Take A Silver Over All Other Salmon

There is no wild salmon I do not love. But when people ask me when to go and fish in... 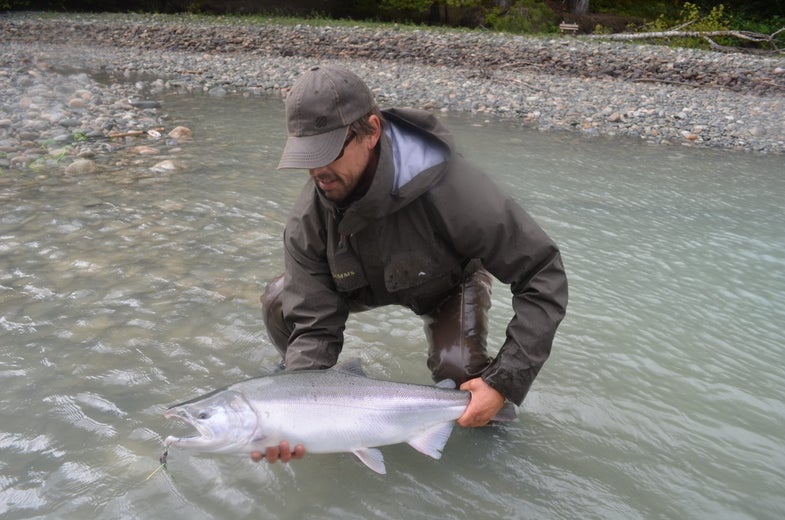 There is no wild salmon I do not love. But when people ask me when to go and fish in Alaska, I tell them to get there when the silvers (cohos) are running, which is usually the last major push of the year. That’s right around now in many places.

My buddy Duncan Coker and I got into a few silvers on the Dean last week, and while we were really “after” the steelhead, a tough-charging silver is no consolation prize. Kings (chinooks) that run early are the biggest. And there is definitely something special about tying into a 30-pound king with a two-hander on a wide river. The days are longest (fishing at midnight?) when the kings run, but they’re also usually the buggiest.

Sockeyes (reds) follow the kings, and are probably the tastiest of the salmon, in my humble opinion. And there is absolutely nothing like the sight of a river turned crimson with a thousand spawning sockeyes.

Chums (dog salmon) are, as I have said before, one of the most under-appreciated fish in the sporting world. And with a maw full of gnarly old teeth, the dogs are ugly in a very photogenic kind of way.

But pound for pound, and pull for pull, give me silvers above all others. They aren’t the biggest, but I believe they are the scrappiest. They jump, and they eat dry flies. There’s nothing like seeing a silver grab a pink “wog” being skated through a run.

Of course, if ever there were fish where the “it’s all good” mantra applies, that would be salmon. Still, I am curious to hear how you’d rate them, from the Pacific Northwest to the Great Lakes.