Yet Another Reason to De-Barb Your Flies

There’s a time and place to leave the barbs on your hooks when fly fishing. Most salt water species almost... 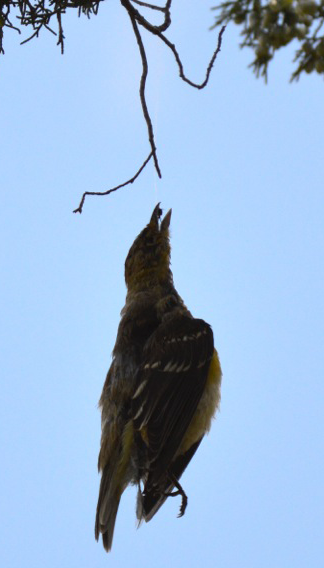 There’s a time and place to leave the barbs on your hooks when fly fishing. Most salt water species almost require that you have a barb, bass fishing would be tough without it, and some larger freshwater bruisers also need the added advantage of a barb. When you’re trout fishing though – I would say, 99% of the time there is no need for a barb. Not only does it do far more damage to the fish, it can cause you much pain and suffering if you accidentally hook yourself. I personally double check anyone on my boat that’s swinging flies around my face and make sure there are no barbs on any hooks.

The image you see here was sent to me by guide and good friend John Perizzolo. John’s a guide with Breckenridge Outfitters here in Colorado and also makes some of the prettiest custom holsters you’ll ever see. John came across this poor bird earlier in the season hung from a tree with fishing line and what looks to be a copper john wedged in it’s beak. Look closely at the cropped version – he’s very obviously hanging by a fly… Now, there’s no proof that this bird would have lived if the fly was de-barbed, but I have a sneaky suspicion he probably could have wiggled out. I’ve seen this a handful of times and both John and I have seen bats do the same thing.

What’s your take? Do you always de-barb?