Two old Savages face off in today’s gunfight: the venerable Model 99 deer rifle against a great utility gun, the... 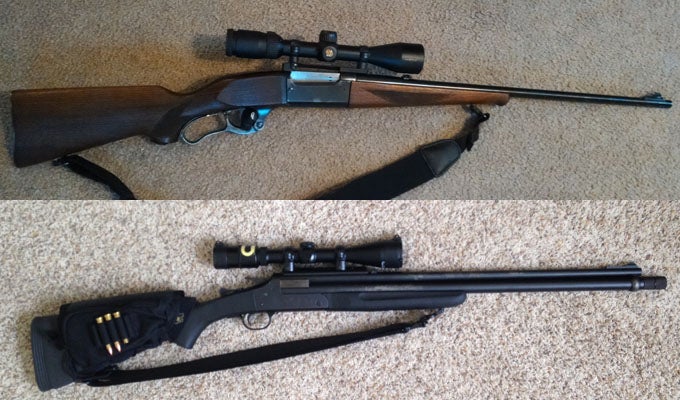 Two old Savages face off in today’s gunfight: the venerable Model 99 deer rifle against a great utility gun, the Model 24.*

The 99 needs no introduction, but I’ll introduce it anyway: Savage’s rotary magazine lever action debuted in 1899 and remained in production for nearly 100 years. Its strong action and rotary magazine made it suitable for bullets and cartridges other lever actions couldn’t handle, making it a rifle well ahead of its time. This one is chambered for the classic .300 Savage and it comes with a good family story, too.

The Model 24 break-action combination gun was introduced in 1939 during the Depression as a versatile, budget-priced firearm. It came in .22 LR over .410 originally but has been made in many combinations of calibers and gauges over the years, although it is now discontinued. This particular Model 24 is .30-30 over 12-gauge.

This is my Savage 99 chambered in 300 Savage. This specimen sports the at-the-time groundbreaking rotary magazine. My grandpa carried this rifle for 50 years, killing countless deer. On his 81st birthday, with heart and health failing him, he shot his last deer. Because of his pacemaker, he couldn’t keep his rifle steady, and he filled that little doe full of holes. I was 10 at the time, and my dad told me to go help grandpa with his deer. Disgusted with himself, Grandpa handed his rifle to me and said, “This is yours now.” I took it out for nostalgia’s sake last year and killed my biggest buck ever with it. Grandpa’s rifle is still one heck of a gun.

I purchased this Savage model 24F used almost a decade ago. It is a .30-30 Winchester over 3-inch 12-gauge, so I couldn’t pass it up. It had a broken firing pin and bent mainspring plunger that I repaired right away, but last year I decided it was time to fix it up. The scope is a Trijicon 3-9x with a yellow post reticle that was given to me as a gift. I had the scope base mounting screws changed to No. 8s and raised the stock comb with a Beartooth cheek pad. The BlackHawk cheek pouch holds my ammo, ID, and tags. I took off the hard rubber butt plate and replaced it with Limbsaver slip-on recoil pad. I use an Undertaker high-density turkey choke that patterns 97 pellets of No. 5 Hevi-Shot in a 10-inch circle at 40 yards. The rifle barrel shoots within an inch at 100 yards with Hornady 160 grain FTX Ammo. The best part is that both barrels shoot to the same point of aim. I have read that it is not that unusual with this model Savage. I used this gun to kill a big doe and a 12-pound jake last fall.

Obviously, I believe any rifle can be improved by adding a shotgun to it, but you may disagree. Vote below, and post the comments that make Gunfight Friday such an entertaining read for everyone, myself included. Keep the gun pictures coming to fsgunnuts@gmail.com.

*If this seems like a slightly odd matchup, well, it is. And that might be a hint to observant readers that I NEED MORE GUN PICTURES. SHARP, WELL-FOCUSED GUN PICTURES PLEASE!