A Slow Start to Hunting, but Buck Activity Stepping Up 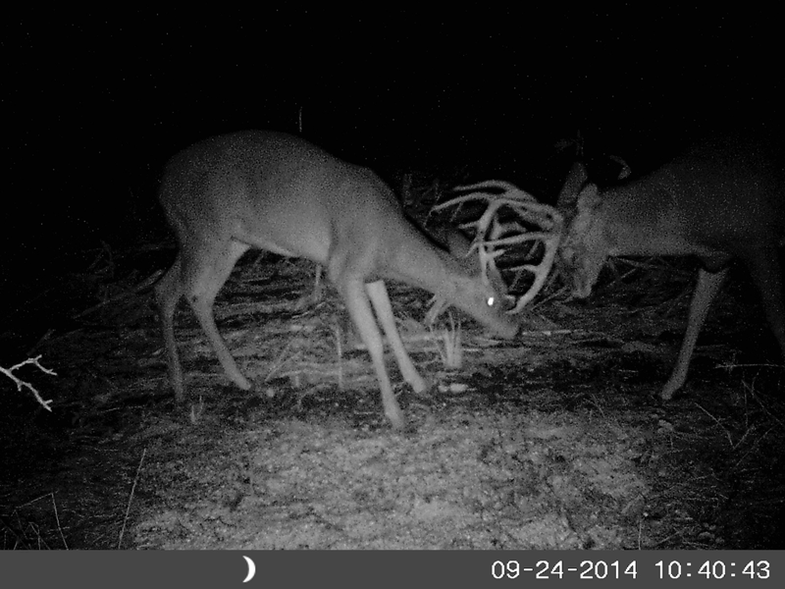 Overall activity status: South Dakota bowhunters kicked off the 2014 archery season last Saturday, September 27—the latest opening day in the Great Plains region—and they are learning what many of us have known for weeks: Things are off to a bit of a slow start this fall for many whitetail hunters. Above-average temperatures and a bumper crop of mast and grass combined with depressed deer numbers to make the South Dakota opener relatively quiet so far—a pattern that seems to apply for the rest of the region too.

Fighting: Few hunters are reporting any battles of real consequence yet, but this trail camera photo from Curt Frazell in southern Kansas proves bucks are indeed mixing it up a bit.

Rub making: Frazell is seeing rubs, but no scrapes yet. I spotted my first rubs—a cluster of three small ones on a timber ridge—that give me hope that an explosion of deer sign may be just around the corner in Kansas.

Scrape making: Not much to report on scrapes this week, but with the October full moon less than a week away, scraping activity should begin picking up soon.

Daytime movement: “Daytime movement has been all does and fawns and a few small bucks,” Frazell reports. The big bucks he’s been picking up on his trail cameras are all showing up at night.

In western South Dakota, Marc Casavan of Spearfish reports that a string of record-high days with temperatures in the 90s had bucks seeking shade and water during daytime. Two other factors are keeping deer out of sight: “We had hardly any acorns last fall, and this year we have a ton,” says Casavan. “And it looks like the biggest hay crop in history here. The prairie grass is tall even back in the timber, and I’ve seen alfalfa 3 or 4 feet high.”

In eastern South Dakota, the problem is a decline in deer numbers brought on by the recent bouts of EHD and drought. “I have cameras in the same spots as last year,” says Mike Bosma, “but I’m very disappointed in the number of pictures I’ve gotten. Deer numbers seem to be down quite a bit, and Game, Fish & Parks has drastically limited the number of does that can be harvested. Things are probably going to be real slow in eastern South Dakota this year.”

X Factor: We’re used to seeing bucks we’ve been watching all summer “disappear” after they shed velvet and start shifting from summer to fall patterns. But transition time can also deliver up bucks we haven’t seen before. Curt Frazell was bummed when the biggest buck on one of his properties was hit by a car. Then last week his trail camera turned up the big boy shown here and turned his attitude around. Just like that, he says, “A new quest has begun.”